Narrative elements such as structure and voice are what define a film and make it resonate with its audience. If a film's setting feels distracting or its themes are unclear, people will likely remember it for all the wrong reasons.

As content marketers, our job is similar to that of a filmmaker. We must understand how to tell impactful stories that forge connections with our audiences.

How can we leverage the narrative techniques used in Hollywood hits to create stories that stick with our audiences long after they've experienced them? Below are five narrative elements commonly found in film that can be incorporated into your digital storytelling process.

Explore the interactive graphic below, then keep reading after the jump.

The traditional way to tell a story is in a linear structure where the beginning, middle, and end happen chronologically. In film, linear narrative structures are most common. However, fragmented narratives-or nonlinear storytelling-became more popular in the later half of the 20th century thanks to the French New Wave filmmakers. Today, nonlinear narratives have become a staple in grittier films like those directed by Quentin Tarantino, David Fincher, and Christopher Nolan. These narratives are structured in a way that allows filmmakers to tell the most effective story, rather than one that may feel stunted by a strict linear structure.

Finding the right narrative structure for your story is just as important in content marketing as it is in film. Not every story should be told with a linear structure. Sometimes, the action happens in the middle, and that's the most logical place to begin. Structure boils down to capturing your audience's attention and holding it until the end. If you feel the beginning of your story is too slow or doesn't provide enough information to keep your reader interested, starting in medias res (in the middle of things) is your best bet.

Setting is a crucial part of a film's narrative. It can be argued that setting is the single most important component in an audience investing in what's playing on the screen. When the setting is right, the movie feels immersive, as if there is no barrier between the audience and film. When wrong, a setting can keep the audience from fully committing to the story. The best settings don't only pull audiences into the film-they reveal important details about the narrative. Character, plot, and thematic details can all be established within the setting in subtle and interesting ways.

Translating narrative settings in movies to content marketing may not seem obvious at first, but many of the techniques involved in crafting a setting for film can be used in your stories, too. One of the best ways to build setting and adhere to the golden writing rule of "show, don't tell" in your story is with interactive content. Pairing multimedia elements such as video, images, animations, and GIFs, interactive content allows you to tell a more immersive story to your audience. With many different interactive elements for your audience to engage with, it's easy to bring your setting to life.

Voice is one of the strongest elements in film. It provides the most information about the characters, giving the audience a better handle on who these people are and why we should care about them. Because voice is such a fluid concept, it can be difficult to nail down. But when you get it right, voice has the power to keep audiences entranced. It can also help establish a film's pacing and plot structure, so it's important for filmmakers to develop a voice that's dynamic to ensure the movie doesn't fall flat or feel static.

The reason digital storytelling fails is because people feel disconnected from the story. A more human voice will help you cut through the white noise and build a connection with your audience. Another technique we can borrow from film is pairing the right voice with the right story. As mentioned above, narrative voice can be accomplished in a variety of ways. A light, humorous voice, for example, is one way many content marketers (and filmmakers) establish connections. Alternatively, applying a more ominous, emotional narration is another way to create a dynamic and interesting voice.

Theme holds a film together. It's the narrative glue that keeps all the other elements in place. A film with an unfocused theme feels like a ship without a rudder, and when this happens, it's easy for audiences to disengage. When theme is clearly presented and feels strong throughout the movie, it leaves quite the impact.

Establishing a theme for your story will help keep your audience clued in on your content's purpose. It'll also help you hone in on the parts of the story that matter most. Themes are particularly helpful when developing episodic content that maintains a common thread throughout each piece. The important thing to remember when developing a theme for your content is to try and limit your theme to only a couple closely related concepts.

Similar to theme, tone helps set the overall atmosphere in a film. The way filmmakers establish tone is by incorporating other narrative elements, such as setting, structure, and voice, and ensuring they all take on a similar quality. If these elements are discordant with one another, the movie will feel confusing. One of the best examples of tone in film is Christopher Nolan's The Dark Knight. His gritty follow-up to Batman Begins further cements the darker, more intense reboot to the Batman franchise and set the bar for other movies in the DC Universe to have a similar feel.

Tone is a necessary component of any digital storytelling strategy. But remember that tone will vary depending on the type of story you're trying to tell. Once you figure this out, creating atmosphere is a matter of controlling the language, visuals, and other multimedia components. If your piece is more emotionally driven, it makes sense to utilize elements that enhance the touching moments. If your story is educational, highly emotional language or visuals might not pair well with the story you're trying to convey.

That's How You Make a Hollywood Hit

Narrative techniques provide the scaffolding for films. Structure, setting, theme, voice, and tone all play an important role in keeping audiences invested. If any of these elements slip, a moviegoer's attention will falter. But when they're incorporated flawlessly, it's a safe bet that the film will be a box-office hit. Ensure your next piece of content is a success by adding these narrative techniques to your storytelling arsenal.

Meg Cannistra is content marketing manager at Ceros, an interactive content marketing software startup. She loves staying current on new developments in the content marketing world and writing about those that interest her. Before diving into the world of startups, Meg worked for a textbook publishing house while pursuing an MFA in creative writing. She procrastinates writing her young adult novel by playing with her cats, Gloom and Doom, and binge-watching teen comedies from the early 2000s. 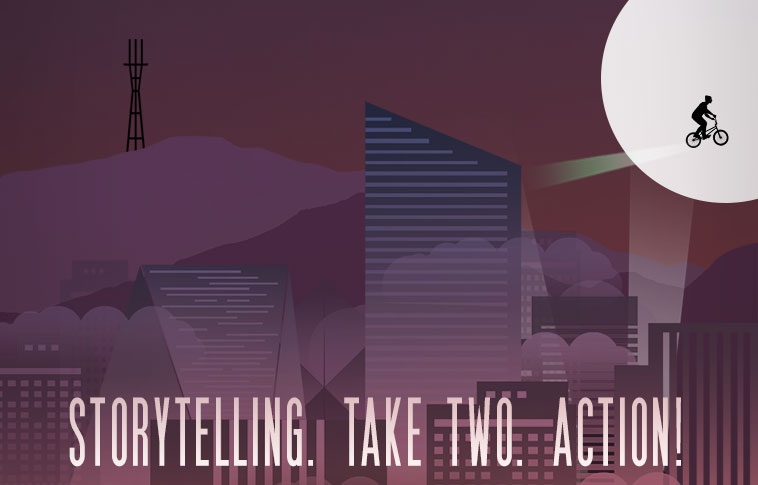