Once a year comes the almighty Super Bowl: America's biggest night for sports and advertising. And in Super Bowl 2019, we saw a New England Patriots 13-3 victory over the Los Angeles Rams, but what brand was the real winner of the night?

Born and raised in New England, you could say I'm a die-hard Pats fan; and I sincerely admire this team's hard work and dedication, especially during this "comeback" year. But just like the other viewers who tuned in Sunday night, I wasn't hanging off the edge of my seat with excitement. According to The New York Times, it was the lowest-scoring game in Super Bowl history and only drew in 98.2 million viewers on CBS-the smallest television audience for the major sporting event since 2008.

These low viewership numbers are due to many people choosing to engage with the game through alternate channels like livestreaming as well as forgoing the TV experience entirely to take part in the celebrations in their own time on social media. Smart marketers understand that the real game isn't one on TV screens but in creative digital campaigns that get people talking, tweeting, and sharing.

Ahead of Super Bowl 2019, we polled our followers to see which brand's first-ever big game ad would dominate social media:

We want to hear from you! Which brand’s #SuperBowl debut ad do you think will dominate #socialmedia during #SBLIII? 🏈📺

We selected these brands because they were each debuting Super Bowl ads for the first time, so they all had even playing ground for disrupting audiences. This poll got us thinking about the differences between ads that might have won on TV versus social, and how social might have impacted the decision of our followers before the big game.

Clearly, our audience is a smart group of marketers, as they guessed correctly: This year's winner on Twitter was indeed Planters.

While most of the Super Bowl commercials on TV were deemed safe and even dubbed "snoozefests," that wasn't the case for social campaigns. Mr. Peanut, the iconic mascot/logo for Planters, took Twitter by storm during the game for a few reasons. Against the other brands we polled on, Planters had the highest number of public interactions on Twitter on Feb. 3, according to the sum of publicly available data measured by TrackMaven's comprehensive social analytics reporting. Planters also took home the gold for this Twitter post, which had the highest impact, a measure of relative performance for a single piece of content:

Mr. Peanut also provided behind-the-scenes content for Planters' commercial and shared risky/playful posts, like the one above. Planters had several other high-performing posts compared to Devour, Olay, and Bubly, such as the post below, which, obviously intended to ruffle feathers, did just that-sparking emotional responses from all over the Twitterverse: 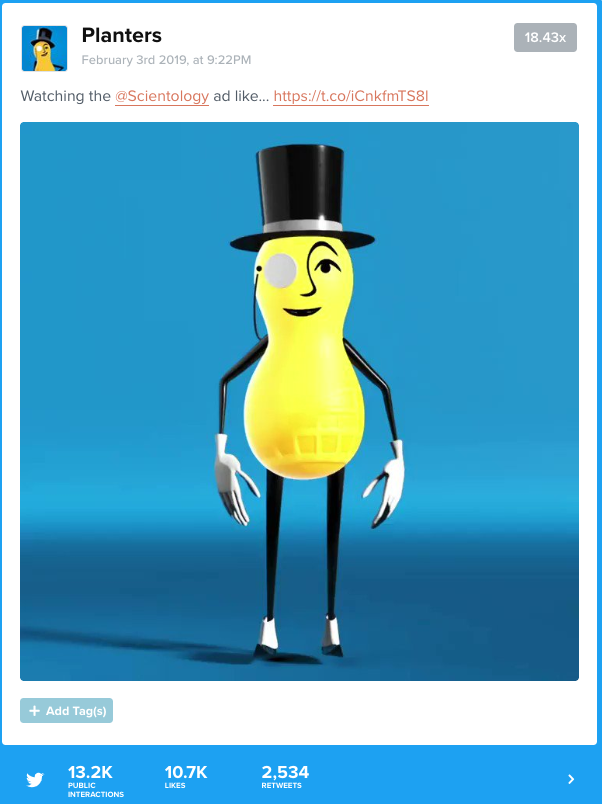 And by commenting on and poking fun at other brand's Super Bowl commercials, Planters showed audiences this year that it was a relatable brand: acting just like the rest of us do on game night with our friends and family. Planters' ability to humanize its brand makes them the clear Super Bowl marketing winner in our eyes. And the internet agreed, with several people commenting and replying to Planters' posts, saying Mr. Peanut was quite possibly the most entertaining part of this year's Super Bowl: 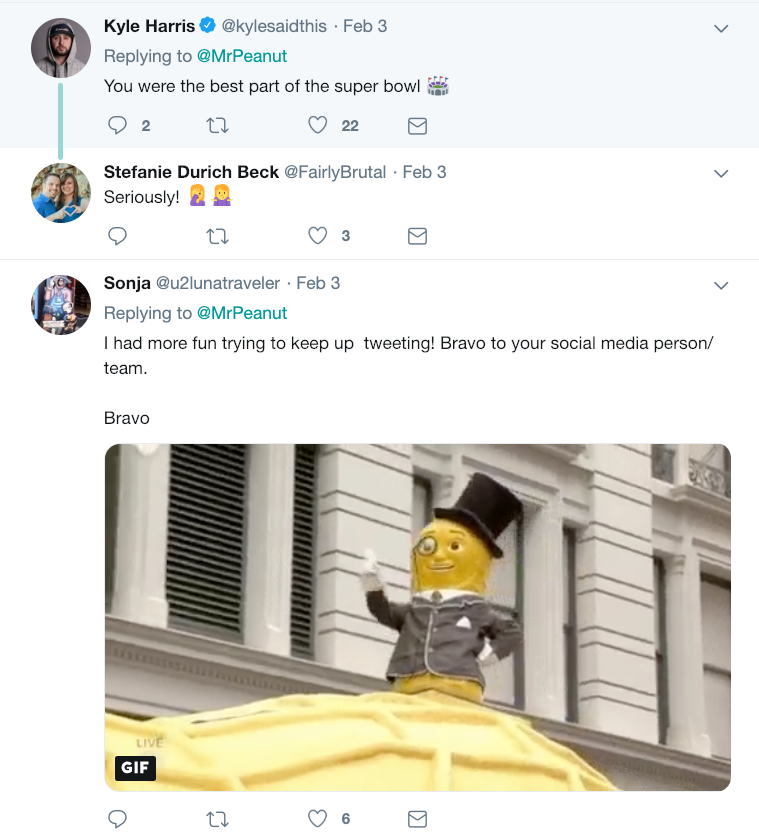 Not only did Planters join in on the Twitter commentary on other brand's commercials, but it ran its own sweepstakes using the branded hashtag #CrunchTime during the game, likely contributing to its high impact score: 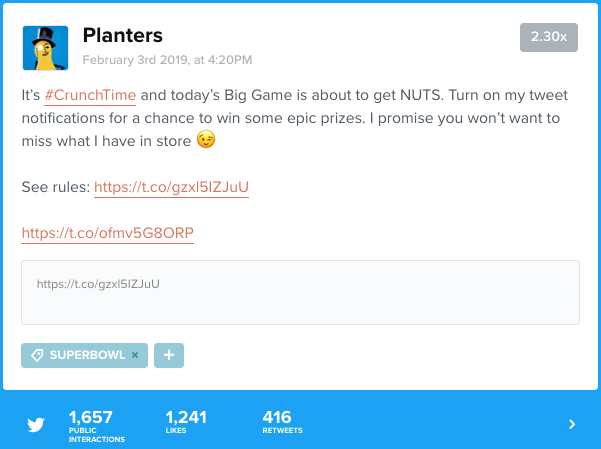 Taking a Closer Look against All Brands 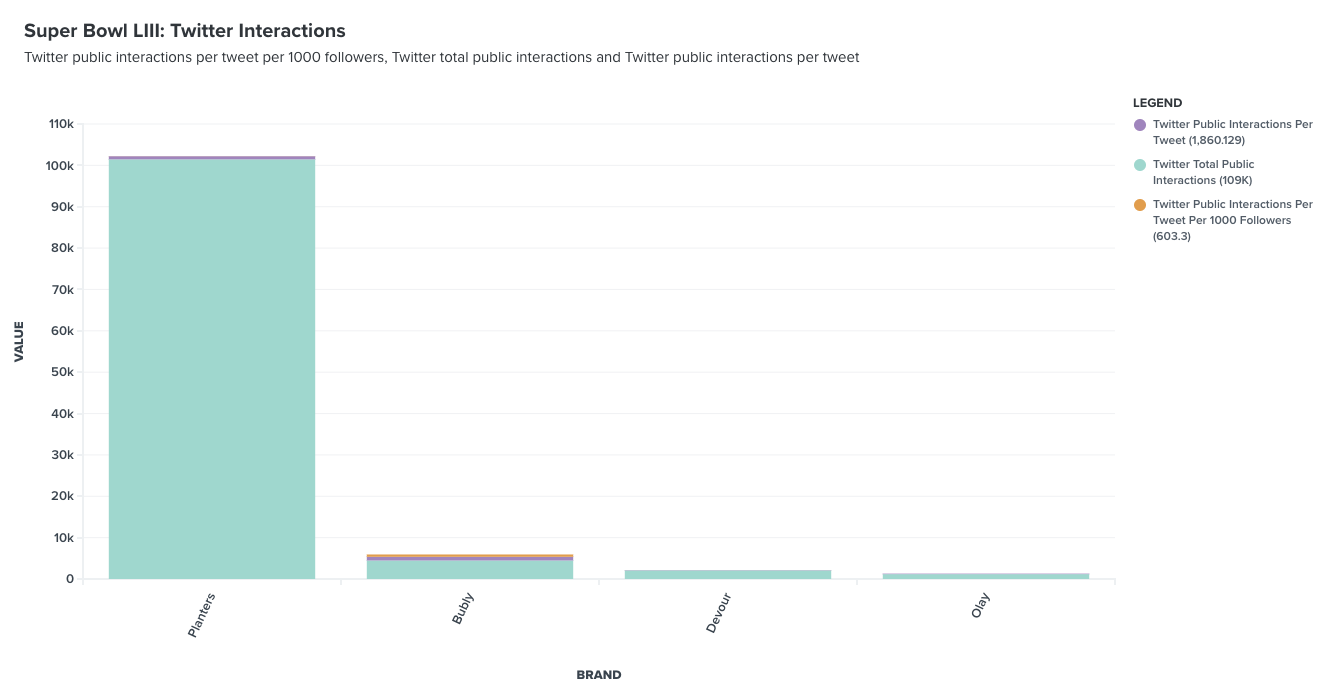 You're probably thinking: That's great, but what about Instagram and Facebook? Here's how Planters stacked up to the other brands on all three channels when it came to public interactions per post:

And that's just the tip of the iceberg. There's so much more analysis that could be done directly in the platform around these four brands and the Super Bowl, but we'll keep this short and sweet since we know nothing is more precious than a marketer's time.

If the TrackMaven data isn't enough to convince your team that social is worth your company's dollars, look no further than Pew Research's recent report. This research shows how social media now outpaces print newspapers in the U.S. as a news source, a strong indicator that this audience is one that will continue to grow over time-so brands should take note.

Television is still regarded as the most popular way to get the news, but it has seen a consistent decline since 2016, something that is expected to continue year over year. Even Netflix witnessed a decline in viewership on Super Bowl Sunday, saying its U.S. streaming numbers were off 32 percent.

So congrats to the New England Patriots on earning a sixth ring, but they aren't the only ones who deserve praise this year. Hats off to all the brands who took a chance on social during the most popular day for TV, and congratulations to Mr. Peanut and Julian Edelman for earning this year's MVP.

Did those screenshots make your jaw drop? Learn more about what TrackMaven can measure, now including Instagram stories, and schedule a demo with us today. 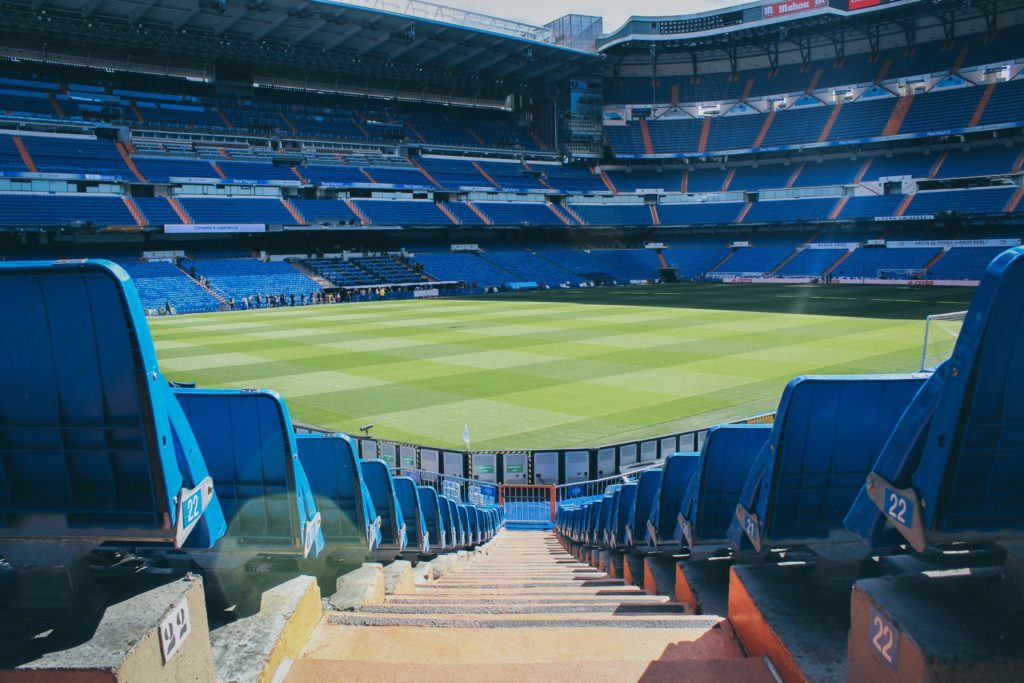