Just one week into 2019 and the people had decided: They simply couldn't get enough of one Alexandria Ocasio-Cortez-specifically, her killer dance moves. A video featuring the Democratic New York representative dancing went viral just as the new year was kicking off, and right when the congresswoman was in the process of being sworn in. Coincidental? Not really. Her political opponents attempted to portray the clip as an embarrassing relic from Ocasio-Cortez's college days, but the internet respectfully disagreed, calling the video fun and endearing, and rallying in her support.

The Huffington Post even published a response article titled, "'Leaked' Video Of Alexandria Ocasio-Cortez Proves She... Has Friends, Can Dance." Hundreds of BU students and alumni also came out in favor of the video, sharing it on Facebook with the #ProudtoBU hashtag. Sarah Symes, a former BU campus tour guide and orientation advisor from 2012-2016, described the video as compelling, going on to say it was "more genuine than most of the promo materials we showed prospective students."

And that, my friends, is an example of higher education marketing at its very best. With one sole video, Ocasio-Cortez was introduced in a unique and memorable way to millions of people, and BU got a huge boost in terms of brand awareness at the very same time. When else has a congresswoman been able to dance her way into the hearts of America? That's the power of video in 2019, and it's a medium that marketing teams can't afford to ignore.

The fact that a nearly decade old educational video project became national attention in 2019 is due almost entirely to the widespread reach and power of social media. Both Breakfast Club stars Molly Ringwald and Ally Sheedy declared their public support for the video on Twitter as did Phoenix, the band whose song it samples.

Social channels are one of the best ways to drive awareness and engagement for higher education brands. TrackMaven's 2017 Digital Marketing Analytics Performance Report found that educational institutions experienced the highest growth across all social media platforms in recent years, with an average annual follower growth of 77 percent.

Boston University understood this tactic and took control of the conversation, posting their own support and coverage of the video to the institution's Twitter account as well as writing a follow-up response piece for their digital publication BU Today that explained the original vision behind the campaign called "The Story Behind Ocasio-Cortez's Dancing Video-from Those Who Made It." In this one move they showed support for a member of their institution's community and insured that they'd be an authority on the web for all those curious new audience members stumbling on the video, and the BU brand, for the first time.

Through social media, higher education institutions have a unique opportunity to communicate value to potential students and generate brand awareness. Since many prospective students may not be able to visit these school in person, digital materials and video guides bring the campus tour to them-wherever they are-and makes your brand globally accessible.

Long before she stepped onto the national political stage, Ocasio-Cortez was already a well-recognized leader within the BU community, serving as a student ambassador and president of Alianza Latina, BU's largest Latin American student organization. And in 2010, the congresswoman, with the help of fellow student ambassadors Julian Jensen and Eric Baker, pitched a Breakfast Club-inspired marketing video project to faculty at BU's Howard Thurman Center in 2010.

The group trekked to the BU dorm rooftops at 6 a.m. on a Saturday, where they were able to write, shoot, and edit the entire sequence in just 24 hours.

Thanks, in part, to this successful marketing campaign, Ocasio-Cortez remains one of BU's most well-known brand ambassadors. And even now, long after her undergraduate days, she remains one of their most involved and recognized alumni often returning to BU to speak on issues important to students.

In addition to utilizing students to tell your message through video-and in some cases, empowering them to take the helm as creative directors for campaigns-consider doing the same with your social media channels. Many universities run social media ambassador programs with students, letting them host takeover days in which the students literally take over the school's social accounts.

Educational organizations like the American Geophysical Union frequently host "Takeover Tuesdays," partnering with researchers and alumni to give a different members of their academic community complete control over the university's Twitter content on a specific day. AGU even has a unique handle for it's Sharing Science program, where each week a different member answers questions, runs polls, and showcases work they're involved in.

For higher education marketers, students are your ultimate influencers. From tour guides to university radio hosts, students serve as the face of your brand's public image every single day. They build brand awareness by wearing your merch, they fill the seats at your events, and they spread the word across social channels about what your university has to offer-for better or worse. To not tap into this powerful resource when building out your marketing campaigns would be a huge mistake.

Showing a sense of connection is one of the biggest themes in higher education marketing. Hence why the word "pride" is so predominant in university gear, almost always following the mascot's name on bumper stickers, shirts, flags, you name it. The fact of the matter is students are proud to be at your school, and that sense of connectedness to a university doesn't just sprout upon being accepted, it stems from brand recognition and smart, authentic marketing campaigns.

The Chronicle of Higher Education hit the nail on the head when explaining why BU's 2010 video has held up nine years later, citing its "goofy and earnest" appeal in the way it showcases the connections and culture at the university. The decision to reference The Breakfast Club also sends a strong message, one that has and will continue to translate well over the years: That social barriers are meant to be demolished, and just like in the 1980s film's detention room, BU offers a place for young adults to do just that, all while finding a sense of belonging, together.

A 2016 report from the National Association for College Admission Counseling's national conference found that an increasing number of colleges and universities are using pop culture references in their marketing campaigns, both on and off social media, to increase enrollment rates. And guess what, it works! Schools that revamped regular recruitment techniques like email questionnaires into more fun, pop culture-based quizzes, opening with questions about favorite films versus academic inquiries, saw a 26 percent increase in replies from prospective students.

But moderation is key. Institutions can risk coming off as inauthentic or pandering if they jump on every internet meme or viral video parody: Remember the thousands of university imitations of the Harlem Shake in 2013? But when pop culture is used sparingly, thoughtfully, and with a sense of humor, it's a great way for higher ed marketers to establish connections with students. 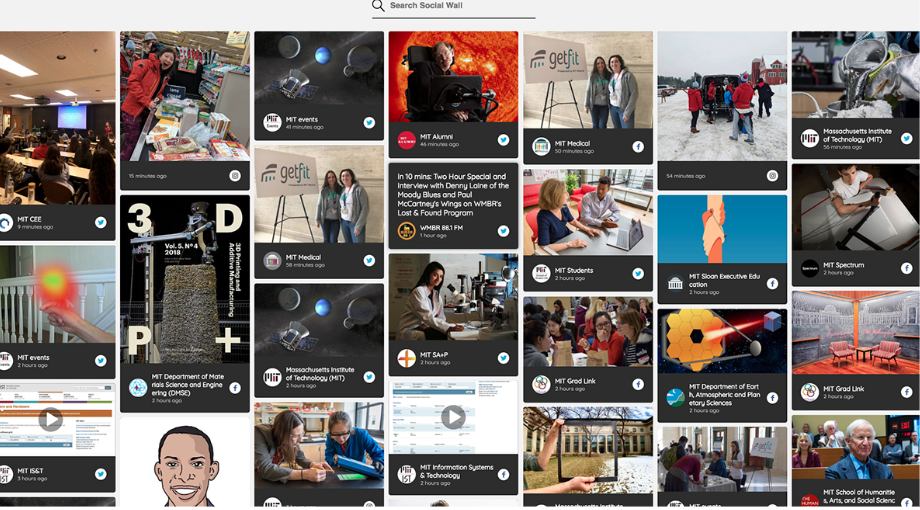 MIT is another major institution that uses social media marketing to bring all parts of its campus life together in one central location. In January 2019, MIT revamped the entire social portion of their website with the MIT Social Media Hub, an aggregated social media content wall that compiles material from 240 Facebook, Twitter, Instagram, and YouTube accounts that belong to MIT department, labs, and centers. The interactive feed allows visitors to immerse themselves in everything happening at MIT in real-time and unifies all of its social materials into a cohesive story.

When the dancing Ocasio-Cortez video went viral, many didn't know that it was official media from the university. In fact, many of the first reports mistakenly called it a "high school video," and implied that they'd uncovered a personal gem from the congresswoman's own archives. Though the video has widely been available on the university's YouTube channel for almost a decade, its unscripted, spontaneous vibe is the reason why it worked then and still works today, too.

So consider this for your higher ed marketing videos: a fun vibe, students wearing your university's colors and gear, shots of dorm rooms and campus landmarks, and last but not least, a fun cameo with your memorable university mascot. Focus on the experience of going to your school, rather than pushing any sort of message. In BU's video, there's no voice-over from a university representative or a direct call to action at the end encouraging viewers to apply. The attention is entirely on the students having a good time, with your university as their stage.

And as the unscripted format for video is on the rise in 2019, with the Story format blowing up on multiple social media platforms. Let's look at the numbers: Last September, Facebook announced that its Stories feature now has 300 million daily active users. Digital marketers are taking notice, as late last year, Facebook also rolled out a monetization strategy for Stories, allowing brands to add links and other features to their story ads.

Rather than devoting large budgets to Hollywood level production standards and going through the complicated process of getting approvals and scheduling around a large cast of actors, education video marketing is shifting to monthly and weekly content that targets individual moments in the student journey.

Yet perhaps there is no better example to demonstrate the true power of a single video for educational marketers than Ocasio-Cortez's own Twitter response, where she recreated her now famous moves as she entered her Washington D.C. office for the first time.

I hear the GOP thinks women dancing are scandalous.

Wait till they find out Congresswomen dance too! 💃🏽

Have a great weekend everyone :) pic.twitter.com/9y6ALOw4F6

The short Twitter video, which now has 800,000 likes shows a pride rather than an embarrassment towards her college days and is proof that a person's experiences at their university sticks with them no matter how far they grow in their career. It was a victorious conclusion to a whirlwind video marketing effort that gave both the congresswoman and her alma mater plenty of reasons to dance. 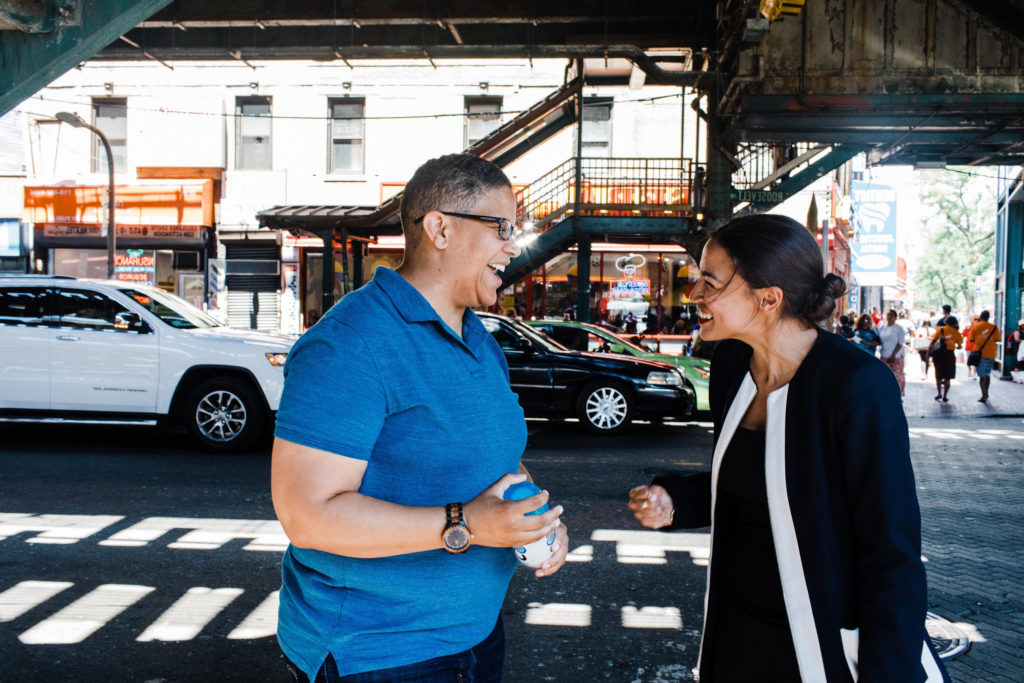