Any professional with hopes of becoming an international business expert has come across Dutch social psychologist and former IBM employee Geert Hofstede's work at some point, either to understand other cultures better or to learn how to communicate to a multicultural audience. Seeking to understand how values in the workplace were influenced by culture, his research consisted of analyzing a large database of employee values scores collected by IBM between 1967 and 1973 from more than 70 countries.

With his book Culture's Consequences: Comparing Values, Behaviors, Institutions and Organizations Across Nations (first published in 1980), Hofstede became the founder of comparative intercultural research. Of course, sociological surveys had been conducted before, but not close to the broad scale of Hofstede's research across a multinational corporation. The implications of his findings have been taught in business schools around the world and applied to social science work and international business relations.

Needless to say, anyone interested in global marketing and business should familiarize themselves with his work.

Hofstede explained his findings using six different cultural dimensions-the preferences for one state of affairs over another that distinguish countries (rather than individuals) from each other. 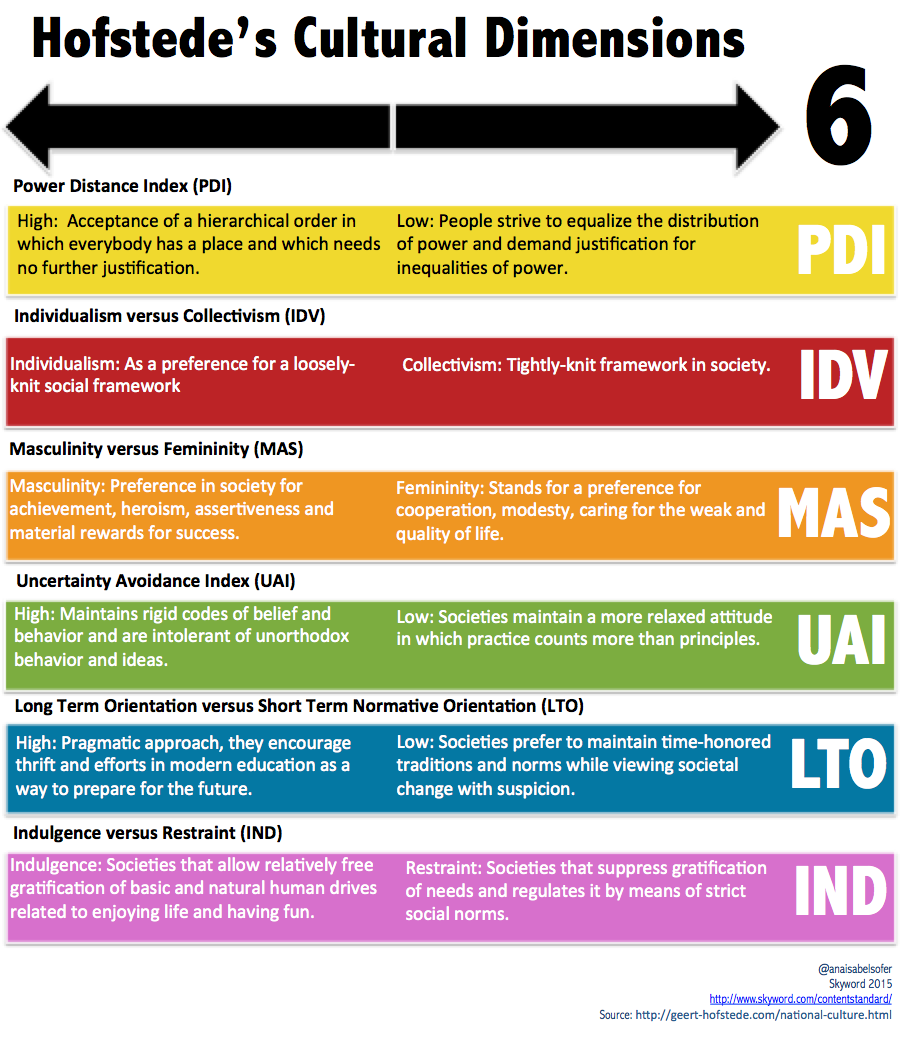 International students and business professionals have used this framework to understand how cultural aspects such as individualism or uncertainty avoidance can influence a negotiation. In practice, it has served as a base to set expectations when addressing a multicultural audience.

Comparing the results from one culture to another can also be applied when implementing a business strategy in different cultures. Let's take China as an example; China in comparison with the United States ranks very high in the Power Distance Index (PDI): 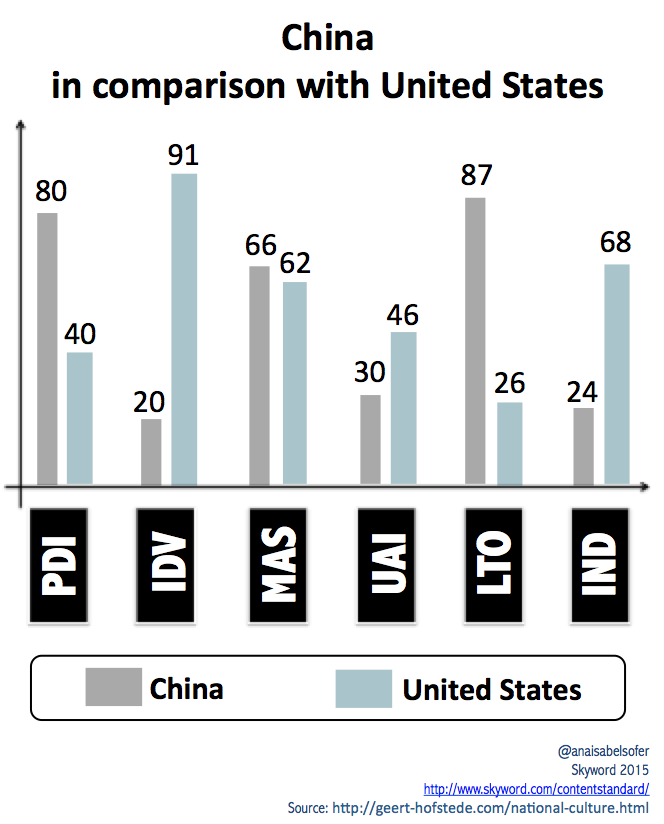 Business professionals such as Bert Markgraf have applied Hofstede's classification scheme in a marketing context, suggesting that since China, for example, reported a high Power Distance-where hierarchies are established by the society and inequality is endorsed by followers and leaders-then a successful marketing strategy could be to emphasize how products create benefits for the whole family or company.

While looking to understand and apply the same framework to multicultural content marketing strategies, western companies often face examples of articles, blogs, and other sites that look like the Chinese version of Alibaba and wonder whether or not to change the design for their audience: 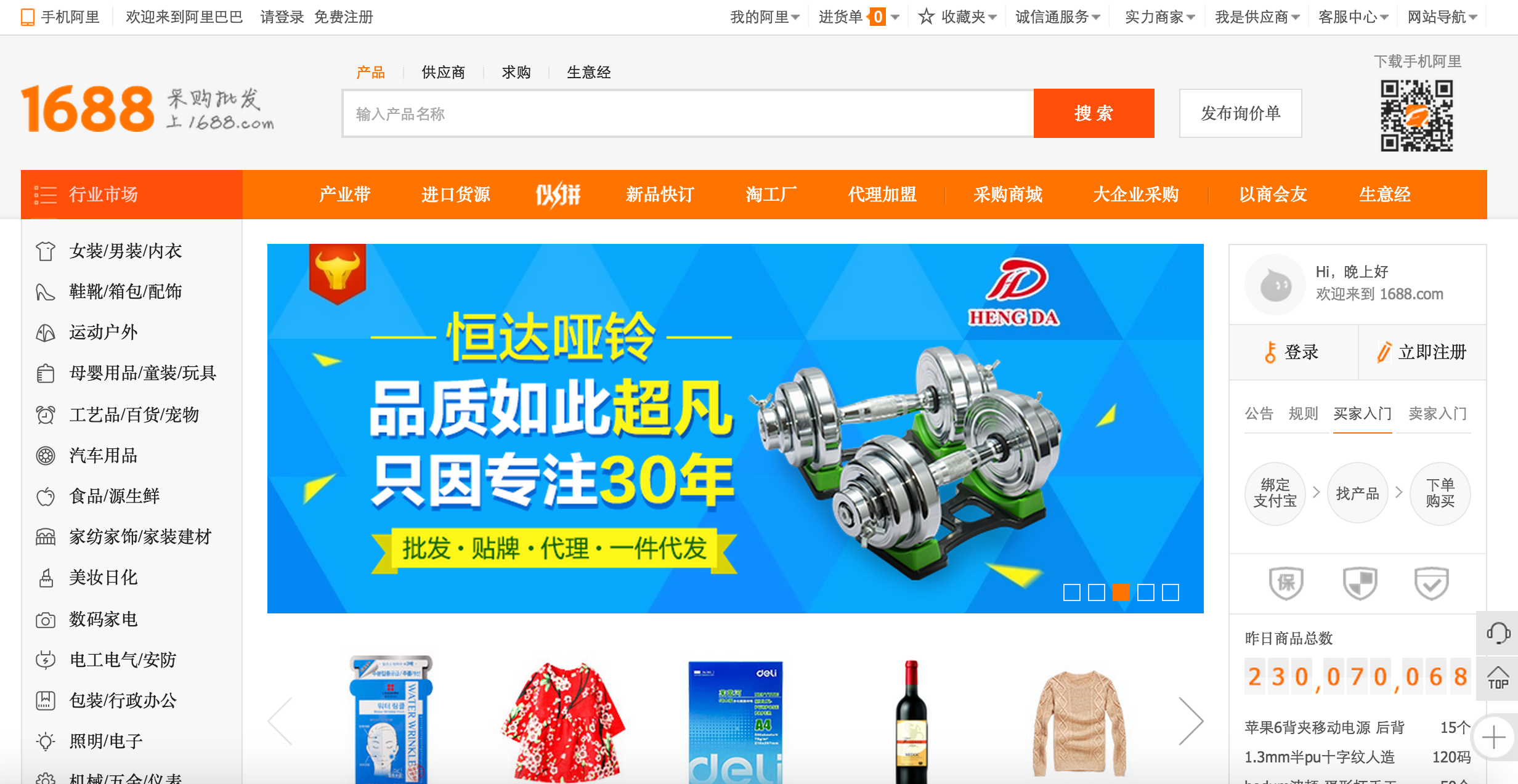 The appearance of Chinese sites may be explained by China's high degree of Long Term Orientation or low degree of Individualism. Many have argued that Chinese sites have such appearances since Web designers add bright colors and animations to highlight or emphasize their typography. Others have defended that Chinese culture, education, and lifestyle require each individual to absorb a great amount of information, resulting in the need for QR codes to provide users with more details.

Whatever the reason may be, Hofstede's theory has proven that familiarizing ourselves with cultural norms and expectations can help us understand multicultural audiences better. But when creating content marketing, a new assortment of variables come into play. When communicating to a multicultural audience, one should build on Hosftede's theory by keeping in mind that culture can be only used meaningfully by comparison to another. Beyond the dimensions, this was Hofstede's starting point: "We are all human and simultaneously unique."

Chinese sites will always look cluttered under western eyes if you do not know the language. Each letter looks like an image next to another; to someone who doesn't speak Chinese, this may convey a disorganized site. But to a native speaker, it's what they expect.

The same logic applies to multicultural content marketing; a vision based on perspective must be formed using a variety of frameworks, experiences, and in comparison to other cultures in order to fully understand each audience. Adjusting your strategy to a multicultural audience will be difficult, but not impossible. The real competitive advantage for brands going global will result from a full understanding beyond language barriers, perceptions, preferences, design, and context.

Want to learn how to take your brand story global? Download the free eBook.

Ana Sordo is a caffeine-based international marketing strategist with experience in a variety of multicultural markets. She is currently working as a Global Strategist at Skyword, as well as a Marketing Advisor for a Boston-based NGO. She is passionate about innovation and creative initiatives. Ana loves outdoor sports and she believes that typographies add harmony to our written conversations. Follow her on Twitter @anaisabelsorfer

What’s the Difference Between an Experience and a Customer Experience?

Marketers vs. Media: Who Will Own the Content Marketing Platform of the Future? 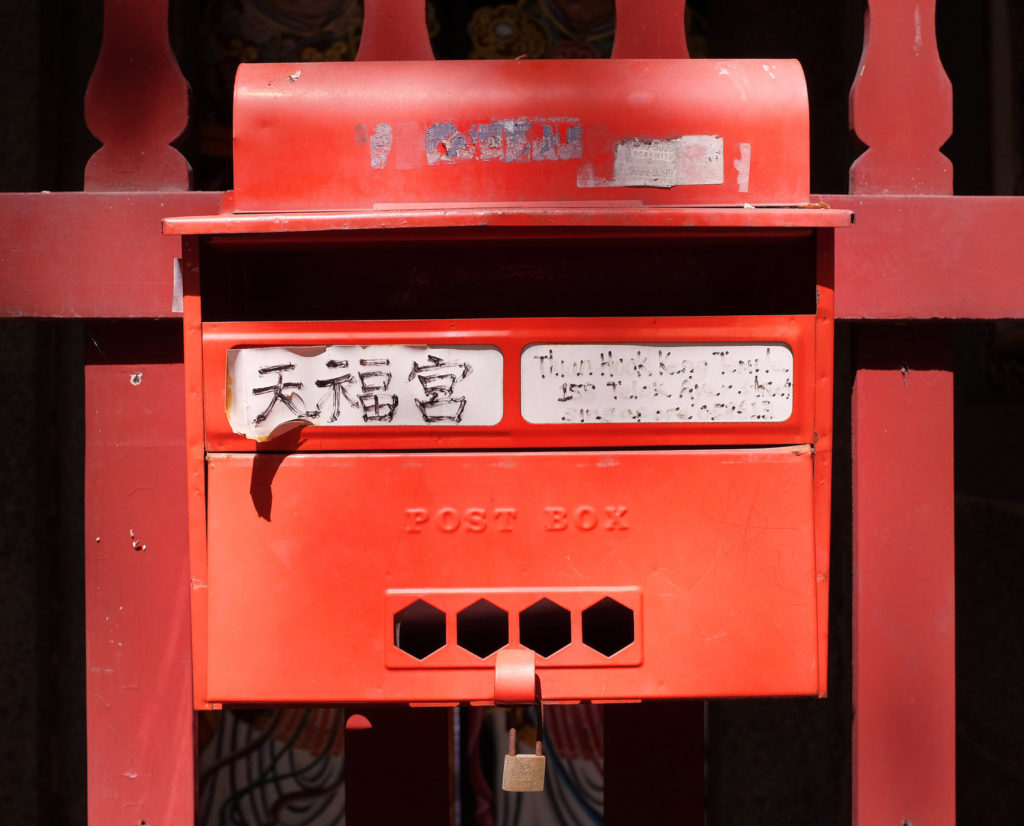