If you've ever drooled over your colleague's Facebook vacation pics or envied a friend's killer social life on Instagram, you'll understand this phrase: The #FOMO is real.

Spawned from social media, fear of missing out-popularly dubbed "FOMO"-describes the anxiety users feel about missing out on exciting or interesting activities that might be happening elsewhere. With FOMO marketing, brands are hoping to convert users' feelings of missing out into action. FOMO is driving new trends in marketing, and brands that successfully tap into that FOMO feeling in non-tacky ways could more effectively influence user behavior. 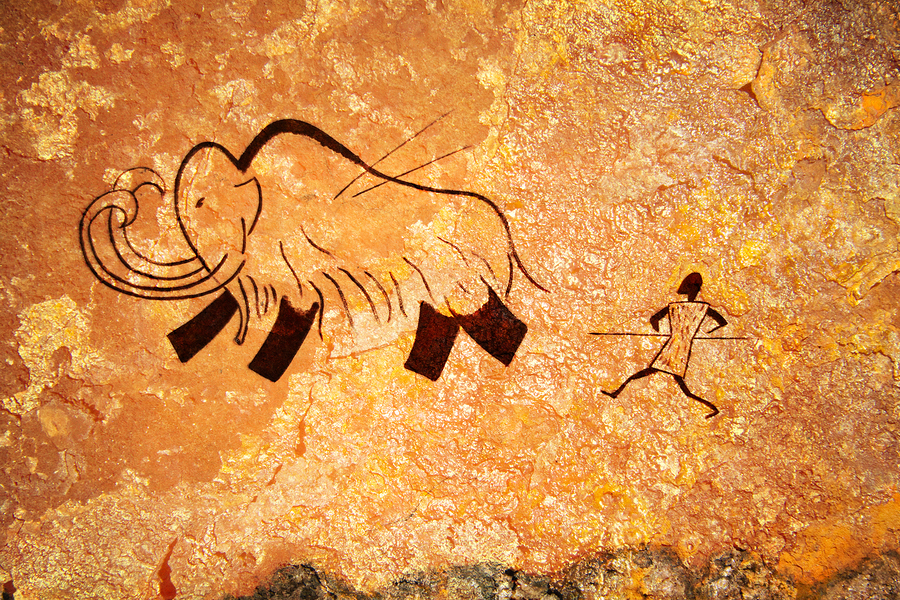 I experienced my own bout with FOMO back when I heard NPR tease a story about "the song that broke the Internet." The song? You might have heard of it: "Hotline Bling." Somehow I entirely missed the video, its thousand memes, and the fact that the entire Internet world was talking about it. You know you've missed out on something big when you first learn about it on NPR.

One of the reasons FOMO is so powerful is that it's hardwired in our brains, psychologists say. Back in the day, our tribal ancestors needed to be aware of threats to ourselves and to others, psychologist Anita Sanz tells Slate. "To be 'in the know' when we roamed around in small groups was critical to survival," she writes. "To not be aware of a new food source, for example, meant you literally missed out on something that could mean the difference between life and death."

Humans evolved to pay attention, be in the right place at the right time, and even engage in gossip, Sanz argues. We aggressively seek vital information, and we get an uncomfortable feeling when we sense we're missing out on something. These days, missing photos from your friend's kid's birthday party may not be a life-or-death matter, but it still may be enough to trigger an ancestral fight-or-flight response.

Faced with that uncomfortable, anxious feeling, users might double down on social media and obsessively check Facebook and Instagram to make sure they're not missing vital info, even if it ends up increasing, rather than pacifying, our overall anxiety. More than half of social media users (56 percent) say they're afraid of missing something such as an event, news, or an important status update if they don't keep tabs on their social networks, according to data from MyLife.com. Perhaps it's not surprising, then, that over half of users have either taken or considered taking a "vacation" from one or more social networks. 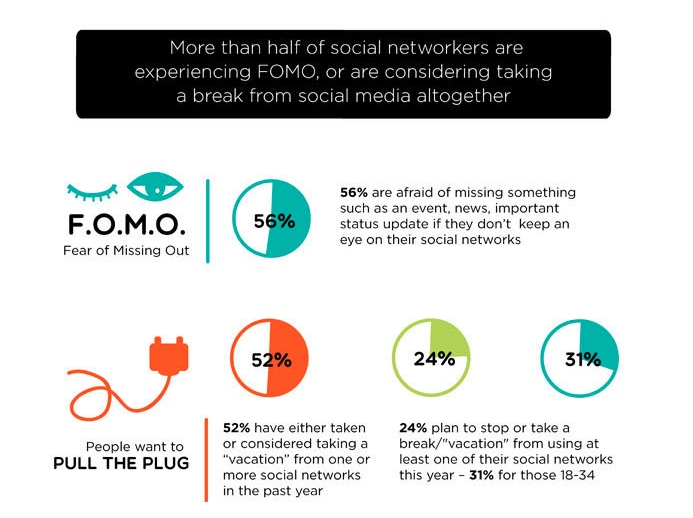 Do a Google search for FOMO and you'll find everything from the Oxford English Dictionary definition to self-help tools to a quiz to rate your degree of FOMO suffering. Whether we like it or not, it seems FOMO is here to stay.

FOMO's ubiquity as a psychological phenomenon and social media buzzword is driving brands to explore FOMO among new trends in marketing. The imperative is twofold: Brands need to influence consumers, and brands need to stay relevant.

Research shows that FOMO can profoundly impact purchasing behavior. A study from Citizen Relations Canada found that 68 percent of Canadian Millennials say they've made a reactionary purchase because of FOMO, often within 24 hours of seeing someone else's experience. The Millennials said their FOMO was triggered mostly by content related to trips (59 percent), parties and events (56 percent), and food (29 percent).

Conduct a Twitter search for #FOMO, and you'll find plenty of users and companies using the term. SXSW, for example, tapped into the sentiment to encourage participation at an upcoming event: 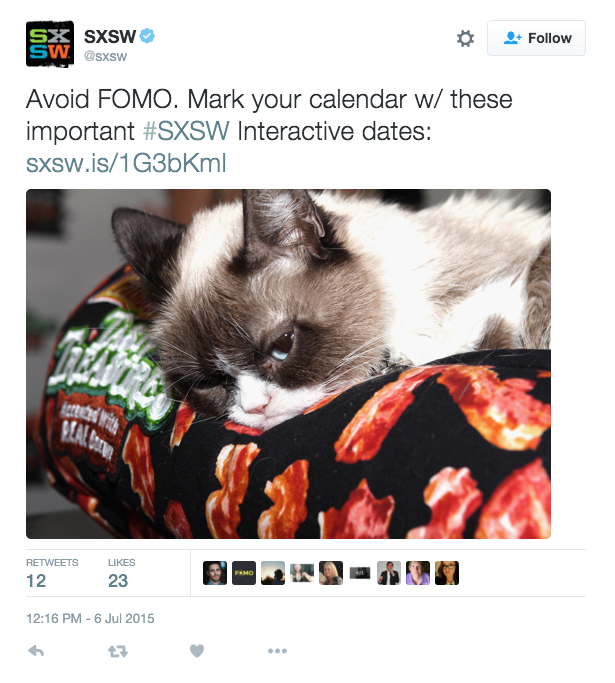 Rent the Runway also used FOMO in a recent Tweet, but with a twist: It offered fans behind-the-scenes experiences from Sundance, a FOMO-inducing event. 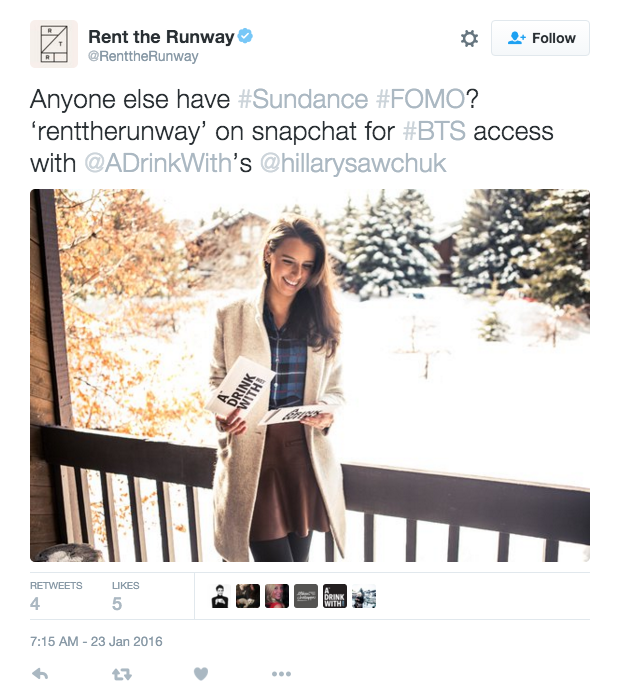 For content marketers, the most promising approach is likely No. 2. Instead of beating users over the head with fears of FOMO, why not offer content that assuages the FOMO pang?

Rent the Runway's approach of offering behind-the-scenes content is one way to snag user attention more substantively. Instead of threatening FOMO, the brand becomes a content lifeline to avoid FOMO-giving users what they need to know without all the work.

Regardless of the approach, brands need to keep the FOMO phenomenon in mind to stay relevant in an increasingly real-time world. Sure, a brand's content may be interesting, but can it compete against all the real-time, must-know-now content out there consumers need to take in to avoid FOMO? As users prioritize content, will they put yours in the "read later" pile? If your content is something that users can live without, it's time to rethink your strategy. 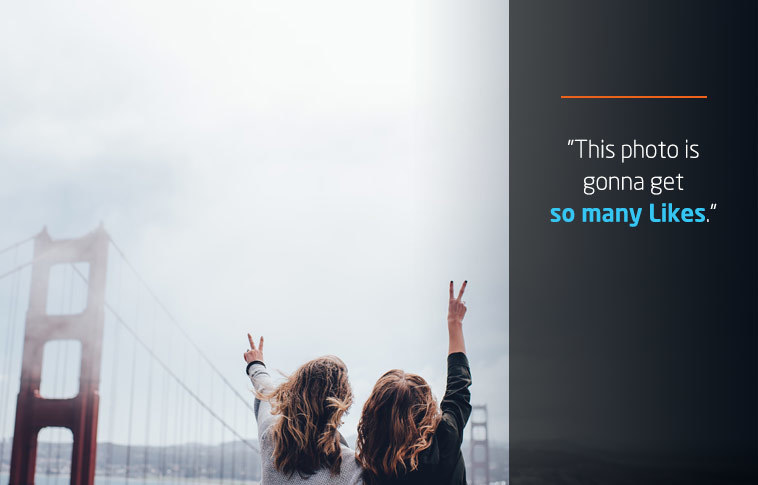