You know those diaper commercials where a mother holds her newborn baby for the first time? There are dozens of them, but as the mom of a 10-month-old, they make me feel all warm and fuzzy inside every single time. I read emails from my formula brand with stories about infant development, customized to my son's age, and similar content from other trusted brands. I feel touched by marketing campaigns that encourage and empower mothers to feel good about their parenting.

Brands are good at marketing to moms. They've spent decades gathering audience insights about who we are, what we value, what we worry about, how we see ourselves, and how we want to be seen. But most marketers don't have the same level of understanding about modern dads.

Why would they? Fathers have traditionally been the primary breadwinners, but mothers have been far more likely to actually purchase said bread. That's still true, but not as true as it once was. Gender roles and family dynamics are evolving quickly, and marketers realize that. Suddenly, we're seeing more commercials and ads about fathers. Even Barbie is including dads. Mattel is honoring father-daughter relationships in its latest marketing campaign, #DadsWhoPlayBarbie.

The problem is that many brands don't fully understand modern fathers. And when marketers don't have deep audience insights into a particular group, they often end up relying on stereotypes.

Why is this a problem? At best, stereotypes are ineffective and alienating. At worst, they're actually offensive to a brand's audience. And they're certainly not the best strategy for marketing transformation.

To master dad marketing, brands need to know about the role of the father in the modern family and how can they gain deeper insights into this increasingly important target market.

Remember when mothers used to tell naughty children, "Just wait till your father gets home and you're in big trouble"?

I don't. My mother was the disciplinarian in our house. On the few occasions that Daddy punished me and my sister, he did it with a look on his face that said, "Your mother is making me do this." We respected his authority, but we also knew we could push the limits further with him than with Mama.

Growing up in the '80s and '90s, I had a few friends whose moms were the "wait till your dad gets home" type, but they were few and far between. Most kids I knew feared Mom's wrath more than Dad's, especially given the fact that at least half our parents were divorced, and weekend dads tend to be pushovers. After all, if you only see your kids a few days a month, you don't want to spend that time nagging them.

Yes, parenting roles changed a lot between the era of "Father knows best" and the era of feisty, independent Boomer moms who could make their children straighten up with a single "don't cross me" look.

And of course, these roles-and gender norms in general-have continued to shift and evolve ever since. As women have taken on greater responsibilities at work, many men have taken on greater responsibilities at home, and modern fathers are more likely than their fathers and grandfathers to be heavily involved in childrearing. Yet, many marketers haven't gotten that memo. Instead, they portray outdated stereotypes about family dynamics, when they should be tapping into audience insights about what modern families are actually like.

Take, for example, Yoplait's Whisper ad from 2016, in which an adorable little girl defies her dad's orders to go back to bed by telling him "You're not the boss. Mom's the boss."

The first time I saw this commercial, I got a good laugh. I even paused the television so I could show my husband, who also thought it was cute. But here's the thing: I wouldn't find it cute if my son ever told his father, "You're not the boss," nor would he be rewarded with a late-night yogurt snack. He'd be in trouble for disrespecting his dad.

In a way, that's what Yoplait did-disrespected dads by stereotyping them as second-class parents, backup for mom, not authority figures. And Yoplait's not alone. In marketing to strong moms, brands often portray dads as supporting characters (or absent characters) instead of the equal parents that many men now are or aspire to be.

In 2015, nearly 200,000 married fathers opted out of the labor force for at least one year to care for children while their wives worked, according to the United States Census Bureau. That's not including men who worked part-time or worked from home to spend more time with their children or men who took paternity leave. And men now comprise 16 percent of single parents with primary custody.

Of those fathers who work traditional nine-to-five jobs, nearly half (48 percent) say they would rather stay at home with their children than work, but that they need their jobs for the income, according to Pew Research.

It's not just dads' work situations that vary dramatically-their parenting styles do, too. There are dads who play catch with their kids and dads who'd rather play video games with them. There are outdoorsy dads who take their kids hiking or camping, and nerdy dads (like my husband) who teach their kids about superheroes and space travel.

How can marketers better understand the different types of dads in their audience? Two ways:

Go to the Source

"Dad" is not a buyer persona. With such simple segmentation, stereotypes are almost inevitable.

It's not just dads who get lumped together into one broad and unrelatable box. This is what happens anytime marketers don't dig deep enough to actually understand their audiences. In a world where content is how brands connect with customers, and audience insights are at the center of that process, marketers must push themselves to uncover truth about people beyond a typical demographic-father, millennial, Latino, homebuyer, business owner-and to instead present more nuanced representations.

Better customer insights also enable brands to deliver more relevant content. A dad who coaches Little League or plays golf with his kids might not be interested in the same stories as a dad who bonds with his kid over a love of science, science fiction, art, video games, or whatever else they enjoy doing together.

How can brands develop more nuanced personas? And how do you determine which customers fit which persona? By asking them.

In a recent article, "Tracking Consumer Behavior? Try Using More Emotional Data, Instead," I explained why given data is more valuable than gathered data. Simply put: Gathered behavioral data tells you what individuals are doing-what they're searching, what they're buying, how they're buying. But given data tells you why they're doing all those things, along with who they are, what matters to them, what they need now, and what they might need in the future.

Consumers are willing to give brands that information if they believe doing so will provide them with more relevant content, more meaningful brand interactions, and a better customer experience. To gain these valuable insights, brands must engage customers in conversations, rather than just stalking them online. Customer profiles are a great start, but you can only ask for so much information before it becomes too much of a hassle for users to complete. And since most people don't think to update their profiles and preferences, that information can quickly become outdated.

User polls, surveys, and interactive quizzes enable brands to learn more about what their customers want and who they are. For example, if a company wanted to understand more about the fathers in its audience, a "What's Your Dad Style?" quiz could be a fun way to engage users (who doesn't love a good quiz?) while also gaining customer insights that lead to more robust personas.

Most companies already have the tools to get these answers. It's just a matter of asking the right questions.

Want to get to know dads or any other group of people? Thanks to the internet, the world now really is a stage, and all the actors have Facebook pages and YouTube accounts.

Just Google "blogs for dads," and it becomes clear that many fathers are really into this whole parenting thing. They're writing about fatherhood, reading about fatherhood, and sharing parenting hacks with other dads. There are even daddy blogs for various subcultures. For example, my friend and colleague Scott Beller has an excellent blog called Raising Nerd, which is about how to encourage children's interest in science, technology, and innovation.

Marketing campaigns that encourage dads to share their stories, their memories, and their advice can help brands connect with fathers. After all, many of them like to gush about their kids just as much as moms do. Audience-created content also gives marketers a sneak peek into what modern families are really like. And sometimes fact is more beautiful than fiction.

For example, check out this spot from Dignity Health's found-footage campaign, Hello Humankindness.

The video, which had been viewed on YouTube almost 25 million times before marketers at Dignity Health came across it, shows a father whose 10-month-old daughter refuses to go to sleep . . . until he crawls into the crib with her. Then, she curls up and falls asleep on her dad.

In a LinkedIn article, Dignity Health Marketer Mark Viden explained why the brand chose to feature the video:

It's remarkable to see a baby soothed by the simple presence of her father. And it speaks volumes to the healing power of being there for someone in a time of need. It also shines a light on a different narrative-a societal shift as fathers and mothers are taking on equal roles as parents.

The healthcare organization's marketing team didn't stop there. They wanted to learn more about the growing population of hands-on dads. So, they surveyed 1,050 US parents and found that:

These are the types of customer insights that lead to marketing transformation, that inspire rich and engaging storytelling, and that help brands avoid stereotypes.

So, who is the modern dad? What does he want from your brand? How can you deliver content that he'll want to read or watch, and that will drive brand loyalty and sales? 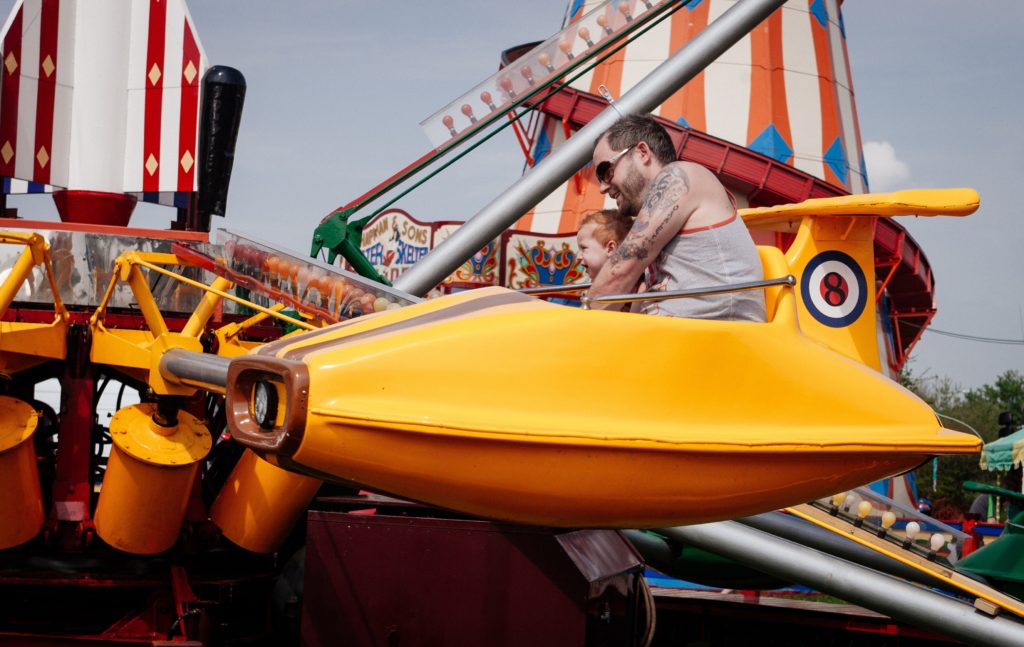