Imagine you're a young engineer working the night shift at a city power plant. Your boss has just retired and named you his successor. It's your first night in charge, which isn't usually very difficult. You mostly watch some monitors and make sure the machines are working properly. But tonight there's a major storm, and suddenly the machines aren't working at all.

Lights go out all over town and so do your monitors. The entire city is relying on you to get the power back on, preferably before the hospital's backup generator fails-something your sister, a doctor, keeps reminding you. The only tools at your disposal are a mobile tablet, a suite of really sophisticated apps, and a small team of engineers.

You've got some tough decisions to make, and you need to make them quickly. So what do you do?

No, really. What would you do? You get to decide when you experience IBM's OUTAGE: A Take Action Film. 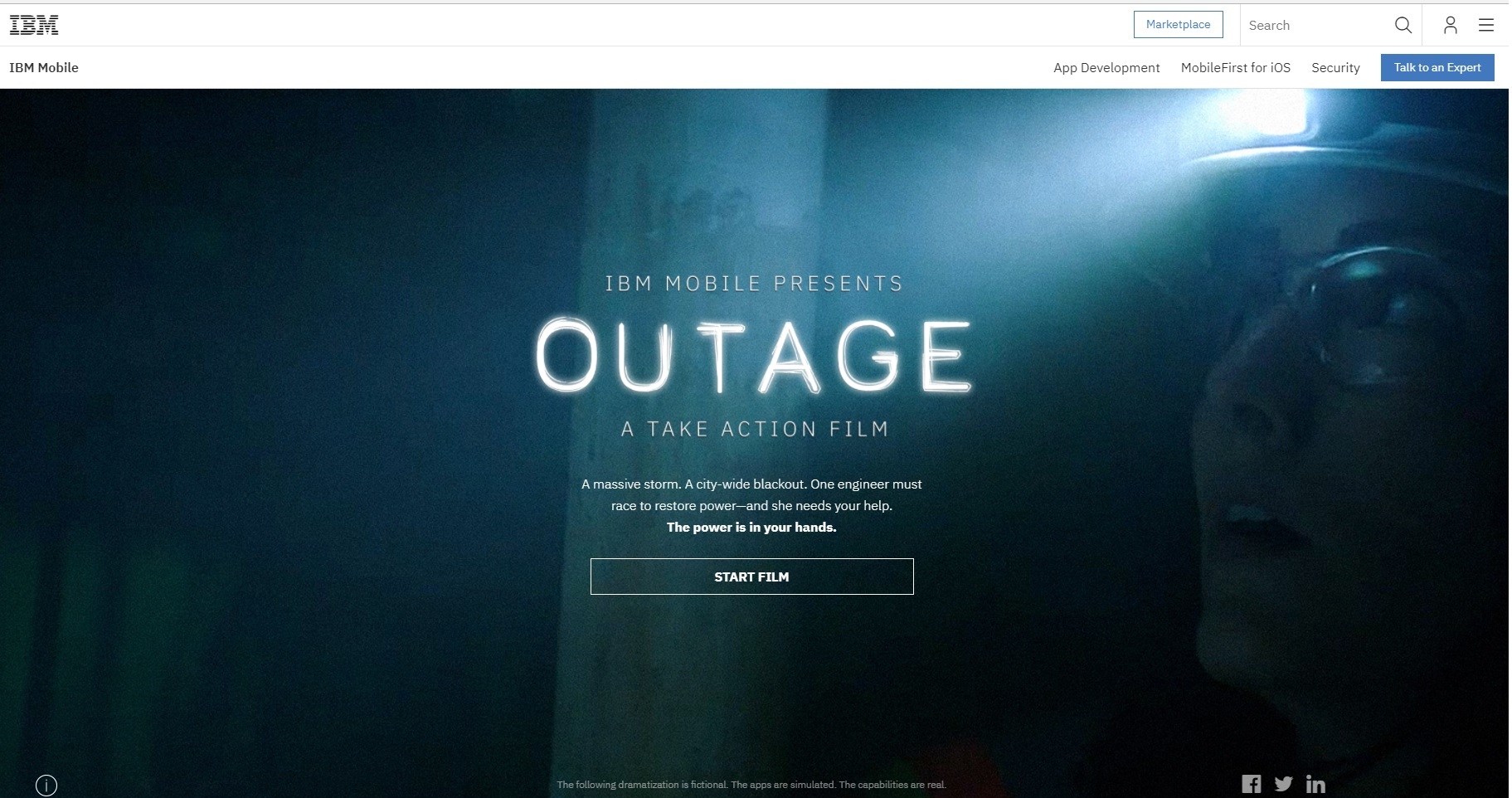 Throughout the seven-minute, choose-your-own-adventure-style movie, you have several chances to make a decision. Depending on your selections, you can experience four potential scenarios with seven possible outcomes. All of them are nail-biters-thanks in part to director Brad Turner, who also directed 24, Homeland, and Designated Survivor-so you'll likely want to go back and watch again with different decisions.

At least that was the case when IBM premiered the film a couple months ago at Mobile World Congress in Barcelona.

"We wanted to create an engaging, interactive experience to attract people to the IBM MobileFirst booth," says Pam Sahota, a content director for IBM Originals who worked closely on the project.* "We didn't want just plain video or someone talking. We wanted something that would truly pull them in and make them feel like part of the experience. We had a mini theater in the booth, and every time someone was sitting in the 'pilot seat,' they got so excited. They were talking to the crowd behind them-‘What decision should I make?' 'Should I do this or that?' They felt like they were the heroine in the movie and they had to make that decision, and they really thought through which mobile process was going to help them get there, and that was exactly what we wanted them to do. We wanted them to not only be excited but to realize the mobile applications that were taking place so they'd want to learn more about them."

For IBM, OUTAGE has been a big hit, using fiction to showcase real technological capabilities in a new and engaging way. For other B2B marketers wondering how to reach an audience, it's a powerful lesson about the value of fictional brand storytelling.

B2B brand storytelling isn't a new concept. Many brands are now using storytelling tactics in case studies and blog posts. They're making documentary films and videos that share the stories of real-life users and launching news and media hubs. But there's one thing we haven't seen much of from B2B brands-fiction.

That's slowly starting to change. GE has had great success with its fictional serial podcasts. Zendesk even created a fictional band to promote its Zendesk Alternative customer service platform. (Supposedly, the band was pretty mad that Zendesk "stole" its name, but instead of suing, they decided to make an album for the company. There's even a great video where you can see the lead singer lament about selling out.) And now IBM is teaming up with Hollywood elite to make action films.

So why is fiction starting to creep into business content? Because it allows brands to:

"You want to make sure the story you're telling really resonates with the end audience you're trying to reach and that you're speaking to what matters to them professionally as well as personally," says Sahota. "For example, we did a series of infocomics for CIOs. The graphic novel format reaches the nostalgia aspect of an individual, while giving them information that's relevant to their career and what their pain points are and how to solve them." 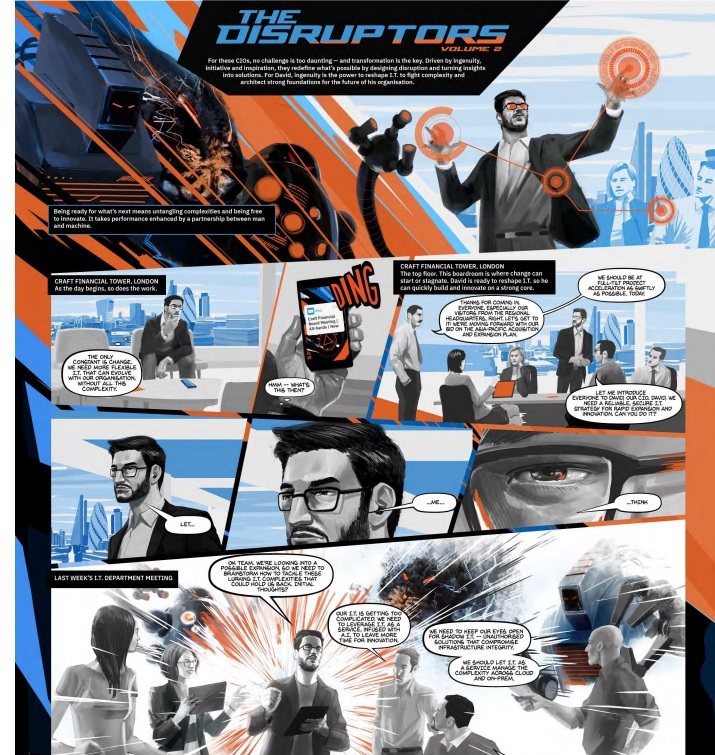 Data-driven articles, white papers, and e-books about business strategy perform well on LinkedIn and other professional channels. But that content sticks out like a sore thumb on Facebook, where it's bookended by pictures of your friends' kids and humorous memes.

"The attention span of an individual in advertising is very minimal, especially when it comes to places like Facebook," says Sahota. "Every channel has a purpose. Most people are on Facebook for personal things, so if you're going to hit them on Facebook, you want to hit them in a manner that's going to resonate with them personally. You're going to get drop-off if you don't immediately grasp the person with an emotional hook or with entertainment. You bring them in through the story and then get them to the content you want them to actually consume. I think OUTAGE did a great job of that because the creative aspects of suspense bring you in right away. You're immediately wondering what's going to happen. You want to watch all the way through the film, and you learn items regarding mobile and how mobile can help you along the way."

Business buyers consume stories the same way everyone else does-with their brains and with their hearts. Despite how much we all love technology, we empathize with people. And fiction has been proven to increase empathy and social connections.

Director Brad Turner touched on the importance of humanity in brand storytelling during an interview at Mobile World Congress. As he put it, "I know there's been a lot of talk about ways technology may be taking over for humans . . . [but in the film] mobile solutions really is there to help a human become a superhero. We still see the blood, sweat, and the tears. We still see her struggling with what decisions she has to make, but in the end, mobile solutions helps her through."

4. Build Buzz and Curiosity about the Brand

Sahota says OUTAGE has performed very well. Not only has website traffic been high, but the film also served its original purpose: driving foot traffic at Mobile World Congress.

"I think OUTAGE was a unique experience for a B2B brand," she says. "The part that really got me is that you're creating an experience where the user feels like they're actually in that experience. They're truly involved and very rarely do they bounce off after one selection. They're going through the experience. When I was at the booth at Mobile World Congress, I had one woman come up to me and go, 'Hey, I heard about this experience and I had to come check it out. Can you please take me through it?' She was the CTO of a very high-level company, and she learned about OUTAGE because it was traveling word-of-mouth, because this was something that truly excited people. It wasn't just another AR experience or another video or another iPad experience. It was something you were sitting in front of, and you felt like you were in it while you were there."

Many B2B companies are at least experimenting with brand storytelling (only about 10 percent of all companies have fully embraced it), but most still steer clear of fictional content. What stands in the way?

"Fictional content is a whole other genre and an entirely new process," says Sahota. "You have to think about it from a true entertainment aspect. You have to be able to tell a story from beginning to end that isn't just dropping in data points or little aspects of product information, because people will know that. It's taking another route of thinking. You have to really think through the whole creative process and think of it as if you're making a movie or TV show. Nonfiction is easy by comparison. You have all the information. You have the data. You can interview someone and get the story. With fiction, you're starting from scratch. You also need to make sure that your story doesn't stray too far from the brand message, which can be difficult at times if you get too creative. You need to ensure that you're still using pieces that will correlate back to the brand in one shape or form, but also ensure that it's a story that will engage the target audience right away. It's that Venn diagram that we always use."

Fictional requires the ability to not just tell a good story but to tell a story that's relevant to the brand and then get it in front of the people you want to consume it.

"That is clutch for fictional storytelling," says Sahota. "You need a creative content person who understands creative ways to tell a story and really understands how to reach an audience across different spectrums, from the site to social to other aspects of digital. Some people might just be like, 'OK, we're making a video. OK, it's going on YouTube.' But what else? What purpose is that video really serving? Where can it really connect with people and in what formats? Can you break it up and put it as part of a Facebook canvas ad that's retargeting someone who watched XYZ? You have to really think of it from an A-to-Z perspective and in a creative manner."

This combination of skill sets is still hard to come by in one person, or even in one team. Content marketers will catch up (we're fast learners), but in the meantime, B2B brands that manage to bring the right people together to tell the right kind of tales will have the advantage.

*Pam Sahota's words are her own and do not necessarily reflect the views of IBM.