You probably had that one friend in college. Someone you didn't like all that much, but kept around because they always seemed to know about the best parties. For those looking for freelance writing jobs, social media can feel akin to that friend—in other words, a necessary evil. It is no longer enough to be able to dissect complicated concepts into digestible and relatable copy or find witty and original ways to subversively spotlight a client's product without ever mentioning its given name—you also have to be able to help share that content with the world.

Adjusting to the New Normal

You've invariably heard a number of requests from your clients that sound a lot like this: "Client XX is looking for a great writer who is also an influencer in the space," or "The client would love to be able to leverage your personal social networks to promote the work." While, of course, no will directly ask you to pump your written work out on social media (to avoid the dreaded "sponsored content" label), there's been a clear shift in the responsibilities expected of freelance writers. You are still a brand storyteller, but now, an almost equal level of expectation is placed on your ability to be a brand-story promoter.

If you grew up in the nascent world of "always on" interconnectivity, this requirement is likely fulfilled with ease. Hashtags and 140-character quips might as well be your native language. But if you're old enough to have an embarrassing AOL handle skeleton hanging in your closet (this guy used to tear it up in '97 as BCeltic007) or are just technologically challenged, achieving social media proficiency can feel daunting.

Social outlets like Facebook and LinkedIn are more intuitive, as they relate to sharing work and growing your network; however, developing an effective Twitter strategy is more complex. Twitter is defined by its rudimentary governing rule: you only get 140 characters to say what you need to say. Learning how to share with economy and clarity is only half the battle—you also need to have followers to consume those golden, truncated nuggets.

If you're thinking this might be just a fad that you can ride out with the poignancy and effectiveness of your copy, you probably need to think again. When I started in content marketing two years ago, I was initially hopeful that I could supplant any social media knowledge gaps with charming editorial rhetoric or dazzling content ideas and strategy. But I was quickly disabused of those notions.

My career up 'til then had been as an editor of scientific journals. These publications have a built-in audience, and as such, I was unfamiliar with the promotional aspects of my new vocation. But I learned soon enough. I sat in client call after client call, and a fundamental truth about content marketing became increasingly clear each day. Our content, whether groundbreaking or fun, would be nothing without an audience to share it with. So, of course, our clients always want to know how we intend to attract those valuable eyeballs. 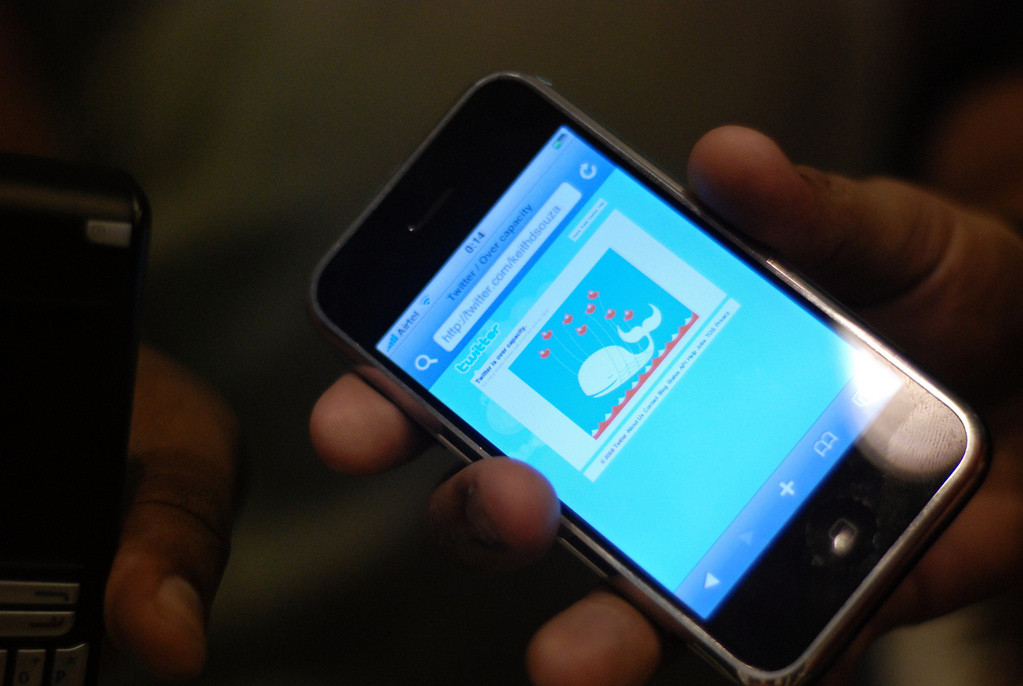 Embarrassment Is a Heck of Drug

My mea culpa arrived with humiliating swiftness. Early on at Skyword, I filled in for my boss on a few calls. While discussing a newly added social media component, I confidently and unequivocally told our client that I would make sure our writers understood that they would have to adhere to the 160-word limit on Twitter. The instantly pained expressions on the faces of my colleagues would have been enough to let me know I had just screwed the proverbial pooch, but I later received a not-so-subtle reminder from a colleague of my folly: a Twitter support article explaining its regulatory finer points. Shame is a powerful motivator, and I decided there and then that I'd better get my @!$% together with this social media stuff or pack it up and call it a career.

Fast-forward 1.5 years. Although, in my personal life, I remain more social media lurker than active user, I have spent a considerable amount of that time trying to unlock Twitter's magic formula. I want to be able to efficaciously advise clients and to help my contributors find more freelance writing jobs by guiding them along the path toward social media relevance.

Building an audience and connecting with that audience represent a sort of chicken-and-egg scenario for Twitter users. You can't start to build an audience if you don't engage them and you can't engage if you don't have the right audience. So, although they both represent vital components of your journey, making sure you have your sights set on the right kind of people is a good place to start.

While I can share a number of general best practices that I've picked up over the past couple years, I don't want my personal reticence to get involved in the space to color your perspective (I have three Twitter followers on my personal account, and one of them is my brother). So, I'll let one of my most plugged-in and savvy contributors share what she knows, instead.

Liz Alton (@BeingLizzie) is a contributor nonpareil on a host of my programs across Skyword. She also happens to have nearly 23k followers and is now writing for Twitter's B2B advice blog. She knows her stuff. I asked Liz to share some of her audience-building secrets, and she was more than happy to spread the word, especially when it comes to helping her fellow writers find more freelance writing jobs.

Liz doesn't recommend the "quid pro quo" follow method, "unless you're very strategic about who you follow and how they represent the type of people you're trying to reach." She explains that, "the things that worked were consistently linking my work to my Twitter account, engaging with people who show interest (often they'll send you a DM, for example), and getting into a rhythm of posting regular content." To increase your sphere of contact, she also finds that "if there are people whose work you really respect, consistently sharing their work in a thoughtful way can also help increase your visibility over time." 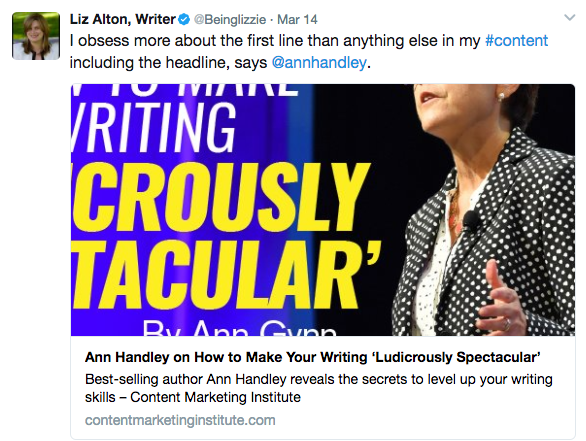 But finding the right people is only half the battle. You also have to make sure you're resonating with that audience enough to keep them coming back for more.

One of the buzziest of all business buzzwords right now is "engagement." It's a metric, it's state of being, it's a new hit Broadway play by Lin-Manuel Miranda (kidding—for now). The point is, it's everywhere. But what does successful engagement really look like on Twitter?

It's no great mystery that the crux of any social media strategy begins and ends with the creation and cultivation of connections. But to truly "connect" on a medium like Twitter, you have far more moving parts to contend with. Between tweets, retweets, hashtags, DMs, and all the work and communications that come with the maintenance of an active and successful profile, it can feel like being given a board game with all the pieces but no rules. Monopoly would be pretty dull if you didn't know you were supposed to stop and buy the properties you landed on (okay, okay, it's dull either way). But according to Sprout Social, you don't need to overcomplicate the concept, "it's about connecting with your target audience and interacting with them."

I know what you're thinking—it has to be more complicated. Well, it is, and it isn't. Sprout Social recommends that users treat tweeting like they're trying to start a conversation. "Your Tweets shouldn't consist of only headlines with a link, inspirational quotes or funny statements. They should open the door for communication and conversation." So, instead of just presenting content to your audience, you need to give them reasons to think, react, and feel engaged.

Of course you want to tweet out your stuff, but that shouldn't be the sole function of your profile. You should look to supplement that content with questions, related content from other influencers, pictures or videos, and relevant stats that will elicit a reaction from your audience. You want them to say "hmmm" or "cool" or "holy $%!@." This strategy allows for a more organic interaction between you and your followers. A natural by-product of this approach will be increased credibility—and your audience will open their ears a bit wider the next time you have something of your own to share with them.

Building relationships and growing your network through engagement are vital to your overall Twitter strategy. However, there are two other elements that can be equally important: timing and cadence.

This is where knowing your audience becomes even more important. As a freelance business writer, your audience can likely be generalized as the "nine-to-five crowd," meaning that they will more than likely be consuming your aforementioned nuggets while at work.

According to a "best times to post" compilation on CoSchedule, peak Twitter time varies depending on your target audience (e.g., B2B vs. B2C), but the consensus seems to be that you'll reach more nine-to-fivers during the workday and on their commutes. All of this is pretty logical. If you're promoting a piece called "5 Ways for a Finance Leader to Reduce Costs," you probably won't have their attention when they're home with the kiddos or relaxing in the back yard.

As Neil Patel said in Forbes, there's no right number of daily tweets; it depends on what you're trying to accomplish. He mentions that between one and five is a good goal, but that doing as many as 50 certainly couldn't hurt.

To check the veracity of his advice, I double-checked with my Twitter Konami-cheat-code-in-the-flesh, Liz. She admits that, "for a long time, Twitter was something I did when I could fit it in. Unfortunately, that meant days of silence followed by a burst of Tweets, followed by silence." This lack of consistency hurt her ability to keep those lines of connection open with her audience, so she advises that you "come up with a schedule and choose a tool that can help you post consistently. I use Hootsuite, but other options include Buffer and Sprout Social." Liz also tweets four to five times a day, which makes sense with the amount of content she produces on a weekly basis. Although your desired output might be slightly less, you should aim to tweet a few times a day, every day, to maximize your outreach.

Progress Is a Marathon, Not a Sprint

I know that all of this is a lot to take in. But I'm not suggesting that everything outlined above needs to be tackled at once. You are building something, so you can't let yourself get discouraged if it takes some time. Make a long-term plan for yourself and set realistic goals. Think 50 new followers by a set date, not 1000 followers by next week. There will be errors you can't account for, just like there will be successes that you don't expect. Remember, you weren't born a great writer—you worked hard and forged your voice and style over time. Bring that experience to this process. Be patient and have fun with it. Influencer status isn't acquired by accident or luck. It's up to you to set yourself on this path and to commit to continuing down it.

So ask yourself, "What am I going to do today?"

Ben Chamas is a Senior Editorial Manager at Skyword. His infatuation with the written word is only eclipsed by his love for his wife and dog. He also digs beer and fried cheese (in any of their glorious iterations). 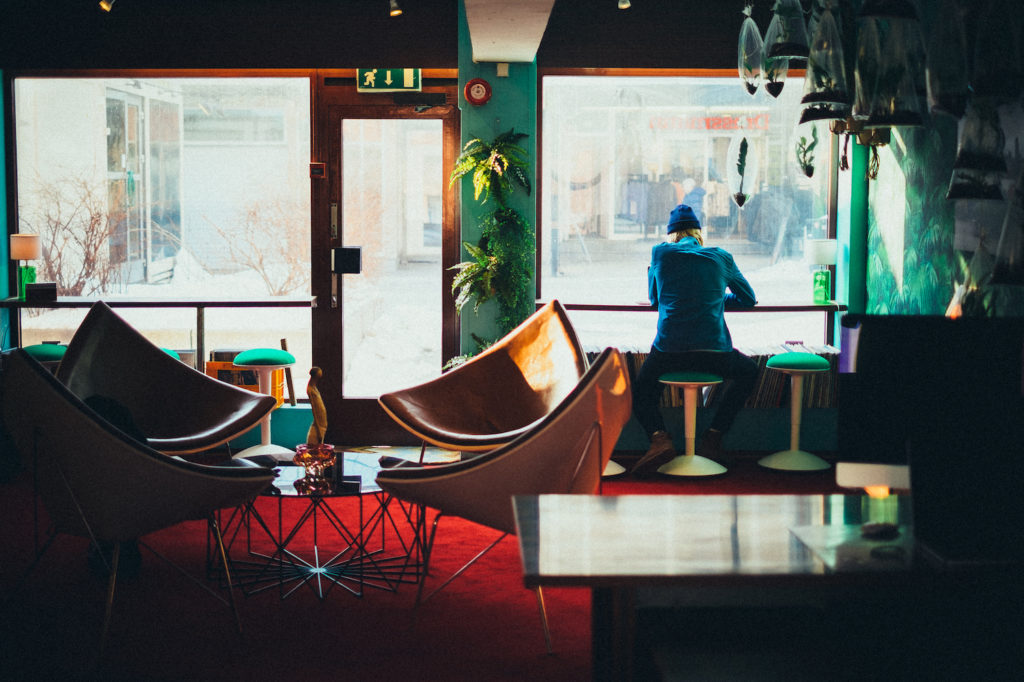