When polarizing former NFL quarterback Colin Kaepernick appeared in the new Nike "Just Do It" campaign, it seemed like a gamble that might blow up in Nike's face. The inclusion of Kaepernick, who was responsible for a wave of national anthem protests among football players throughout the NFL last season, placed the Nike brand at the center of a highly flammable political debate-and sparked outrage among some of its own consumers in the process.

Some critics called for a national boycott of Nike products. Less diplomatic consumers recorded videos of them burning their Nike shoes, while swearing to never buy from the company again, according to Business Insider.

The backlash was so swift, and so visible in the media, that it seemed like Nike may have made a gross miscalculation. But fast-forward a few weeks, and the company's sales tell an entirely different story. According to Axios, the company saw a 31 percent spike in online sales immediately following the "Just Do It" campaign launch. CBS News reports that since the release of the ad featuring Kaepernick, Nike's market value has increased by $6 billion.

Nike created an ad that was sure to alienate some of its existing customer base. While supporters of the brand's message may want to highlight that decision as a case of the corporation risking profit loss to take a social and political stand for what it believes in, the more likely reality is that Nike did its research and decided a campaign starring Kaepernick made good financial sense. That $6 billion increase in market value wasn't the product of a really compelling new line of basketball shoes; it was the result of a well-executed brand story-one designed to serve Nike's most critical customer segment.

Major brands don't make bold storytelling decisions lightly. These decisions are hard-won and pass through many layers of research and executive sign-offs. To pull off a monumental ad campaign that wins over some consumers as hard as it turns others away, marketers and advertisers likely had to present a strong business case for the ad's potential impact.

Nike hasn't discussed the behind-the-scenes research and conversations that ultimately paved the way for the campaign, but a sentiment analysis of the ad shows how it impacted different age groups in different ways. According to an analysis of 2,000 consumers by Morning Consult, millennials and Generation Z came away from the ad with a much more favorable view of Nike than what they had at the ad's outset.

Compare that to the sentiments expressed by Gen Xers and baby boomers, who reported much lower favorability of Nike than younger generations. Both of these consumer segments saw their favoritism of Nike drop significantly at the two spots in the video where Kaepernick appears on-screen.

Meanwhile, Morning Consult notes that while older consumers were much more likely to be inflamed by the ad, they represent a minority of the larger US consumer base. Only nine percent of consumers surveyed had a "very negative" opinion of the ad, while 39 percent said their response was "very positive."

And sentiment analysis also shows that the ad performed much better among regular Nike consumers as opposed to consumers who don't actively purchase Nike products. This graph shows that Nike consumers had a less pronounced negative response to Kaepernick's inclusion in the ad (the dotted line represents when the quarterback first appeared on-screen): 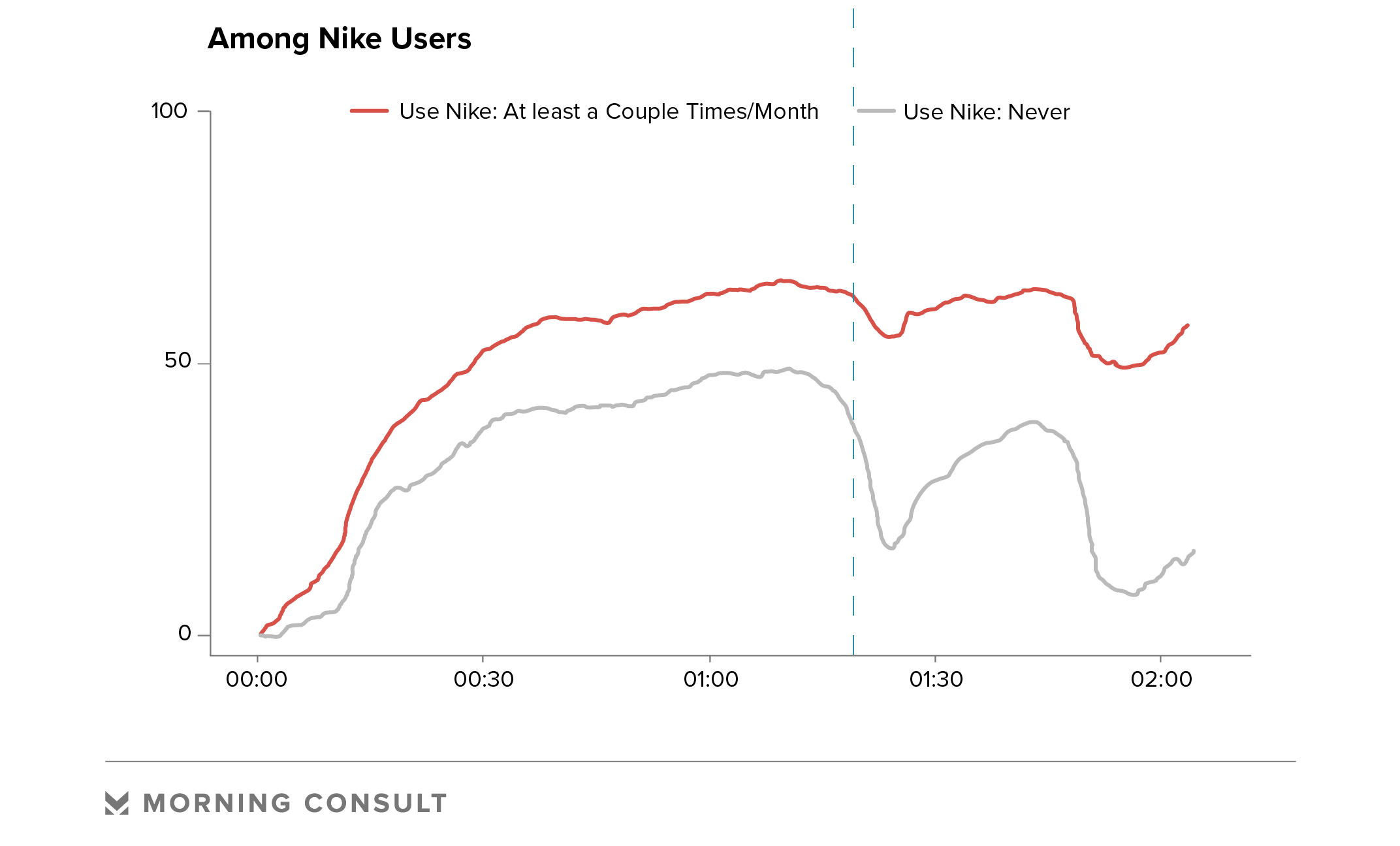 Based on the company's decision to run the ad, it clearly understood that its most critical consumer group skews younger and features more minority and left-leaning consumers. Rather than roll out a brand story that aims to please all of its consumers without ruffling any feathers, the company made a calculated decision to put its more peripheral customer segments at risk in favor of deepening brand favor and loyalty from among its most valued consumers.

Sacrificing Some of Your Audience to Preserve Your Core

Nike wasn't determined to create an ad that proved divisive in nature. Yes, the controversy surrounding the Nike "Just Do It" campaign may have brought the benefit of some extra publicity, but brand marketers should regard the move less as an effort to create inflammatory content and more as a brand story that Nike believed would resonate with its most valued audience. Brand marketers are always using marketing segmentation to tell specific stories to specific consumer groups. Nike essentially did the same thing-the only difference is it targeted a smaller, specific audience through a national campaign, which is a strategy we don't often see.

But Nike's success has plenty of guidance to offer brands. Success in brand storytelling-especially when you're embracing marketing segmentation and speaking to a specific customer segment-depends on how well your company knows its audience. For a multinational corporation like Nike, the appeal of its products may be near universal across demographics and consumer groups, but its brand story will never offer universal appeal to every consumer, all the time. No story appeals to everyone, and even broadly popular stories and content will affect certain consumer groups more than others.

The real challenge comes when you recognize that increasing your brand's appeal to one audience means putting your popularity with other customers at risk. These decisions are a risk/reward decision that brands have to make on a case-by-case basis. Are the gains made with one audience worth the losses you might suffer among another group? A combination of sentiment analysis, social listening, market research, and other data channels can be utilized to assess the opportunity and build a business case for telling brand stories that may be divisive in nature. Don't court controversy just for the sake of stirring the pot; make sure that when you tell a story that puts your standing with one consumer group at risk, you're confident those losses will be accounted for by gains with other, more valued consumers.

Brands may like to say that they value all their customers the same, but the reality is that, at some point, every brand is forced to choose which consumers are their highest marketing priority. That doesn't mean brands should go out of their way to spurn secondary customer segments in favor of appealing to primary targets. But if the opportunity is rich enough and relevant enough to your most valued consumers, it's worth at least considering whether a little PR controversy is worth the boost to your brand exposure and bottom-line. 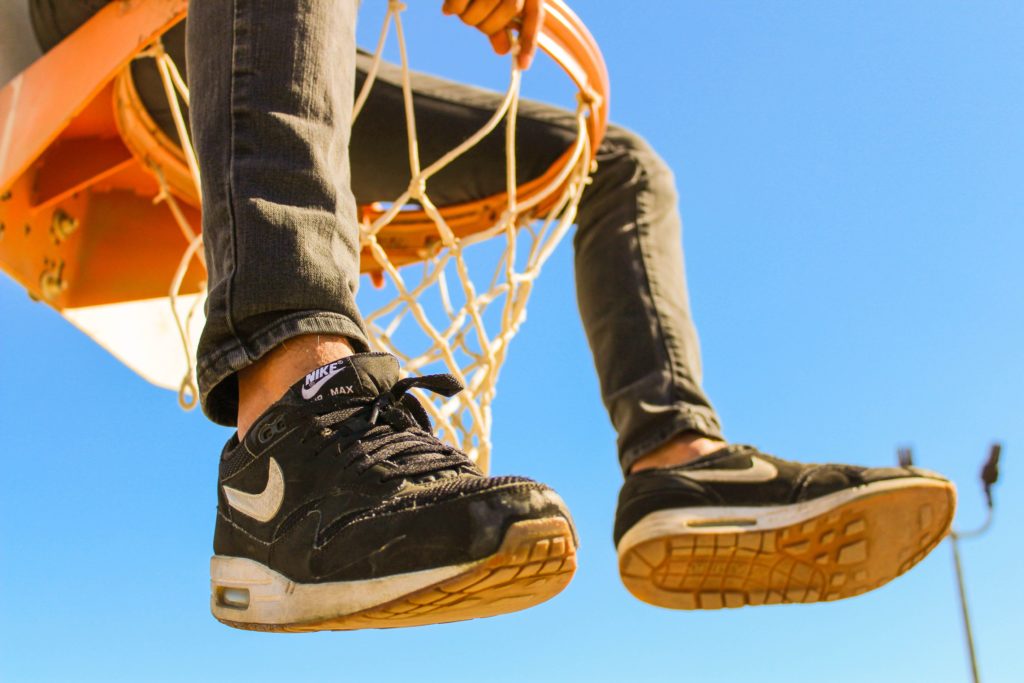