Marketers know that people, especially young people, prefer to do business with companies that share their values. That's why brand activism and cause marketing have been fast-growing trends over the past decade.

Forward-thinking brands have become powerful allies for nonprofit groups working to slow climate change, cure cancer, and eradicate poverty. Yet, while many companies made huge strides toward inclusive content marketing, few went so far as to call out racist ideas and policies until recently. After all, talking up diversity is one thing, but taking sides on social justice reform is another, far riskier move. Not only do you risk angering some people, you risk saying the wrong thing.

Taking a stand on racism might seem like a risky move, but in 2020, given everything going on right now, staying silent could hurt your brand even more. 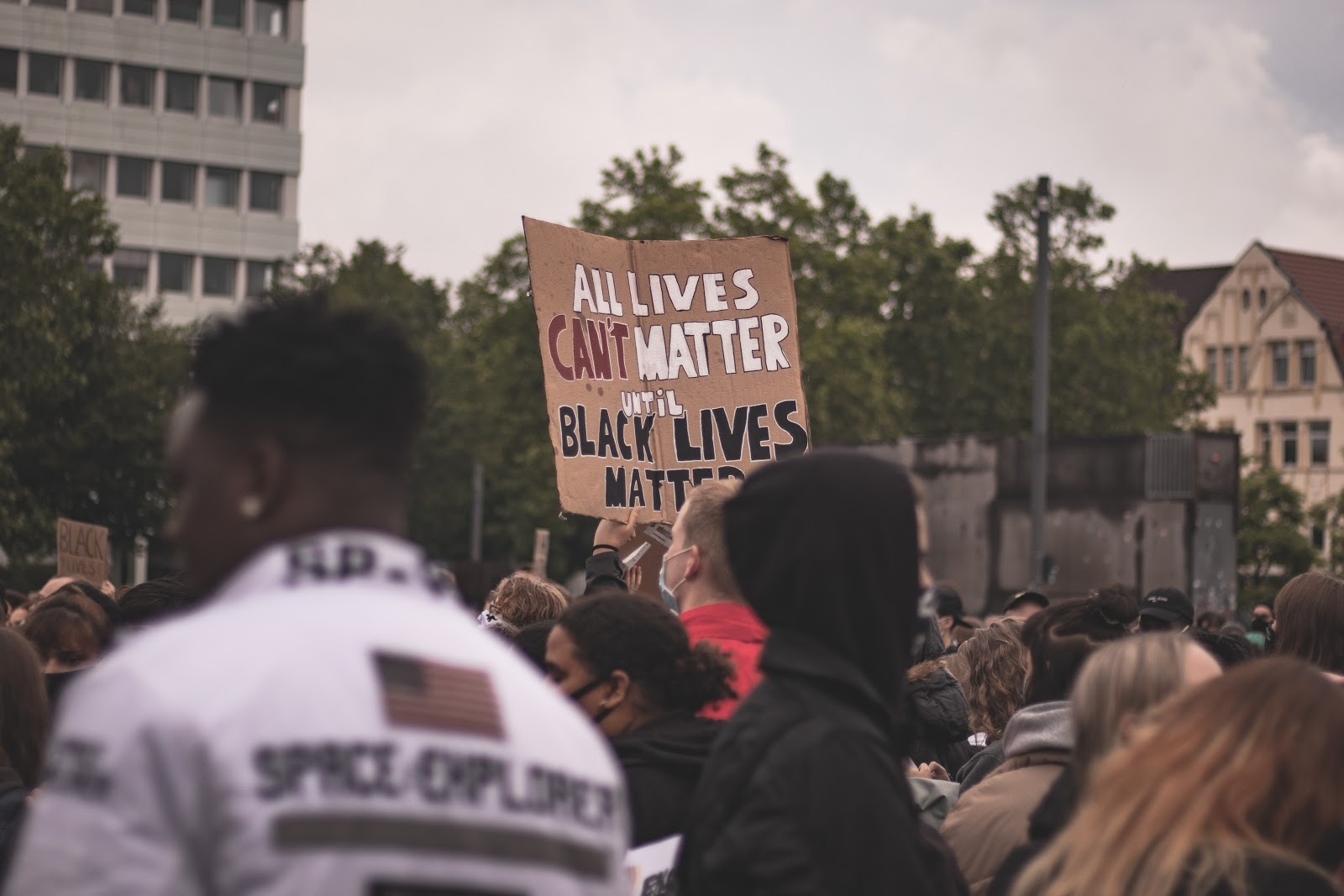 Sixty percent of Americans believe "brands should publicly speak out on systemic racism and racial injustice following the death of George Floyd and other recent racially motivated attacks on Blacks," according to a special 2020 Edelman Trust Barometer report. That number rises to 78 percent among the 18—34 age group and 88 percent among Black people. Sixty percent of respondents also agreed that "how a brand responds over the next several weeks to the protests against racial injustice will influence whether I buy or boycott them in the future."

Market research firm Piplsay got a similar response when it asked consumers the same questions—sixty-five percent said brands should take a stand against racism, and 56 percent said they'd be more willing to buy from brands that speak out on the issue. Nearly half (46 percent) of respondents also said they believe brand activism could lead to a credible change. That's good news for the Black Lives Matter movement and for marketers who genuinely want to speak out because it's the right thing to do.

Activism and capitalism are no longer at odds on this issue. What's good for the cause is good for the profit margin. But marketers beware: It's not enough to say Black Lives Matter; you've got to prove you mean it by taking action. Alicia Garza originated the phrase Black Lives Matter in her viral Facebook post from July 2013. She went on to help cofound the national organization. She puts it this way:

Black Lives Matter is so simple and yet so complex. It really is a very direct assertion of both a problem and a solution at the same time. Here we are seven years later, and I think what's become clear is that some of the discomfort with this statement is that it forces you to choose sides. You can't say some Black lives matter, or they kind of matter, or they matter sometimes. The statement asks you, "Do you believe Black lives matter?" And if so, is that the world that we live in right now? And if not, what are we going to do to close the gap there?

That's exactly what consumers want to know from their favorite brands: How are they planning to close the gap, from a public policy standpoint and, just as importantly, within their organizations? 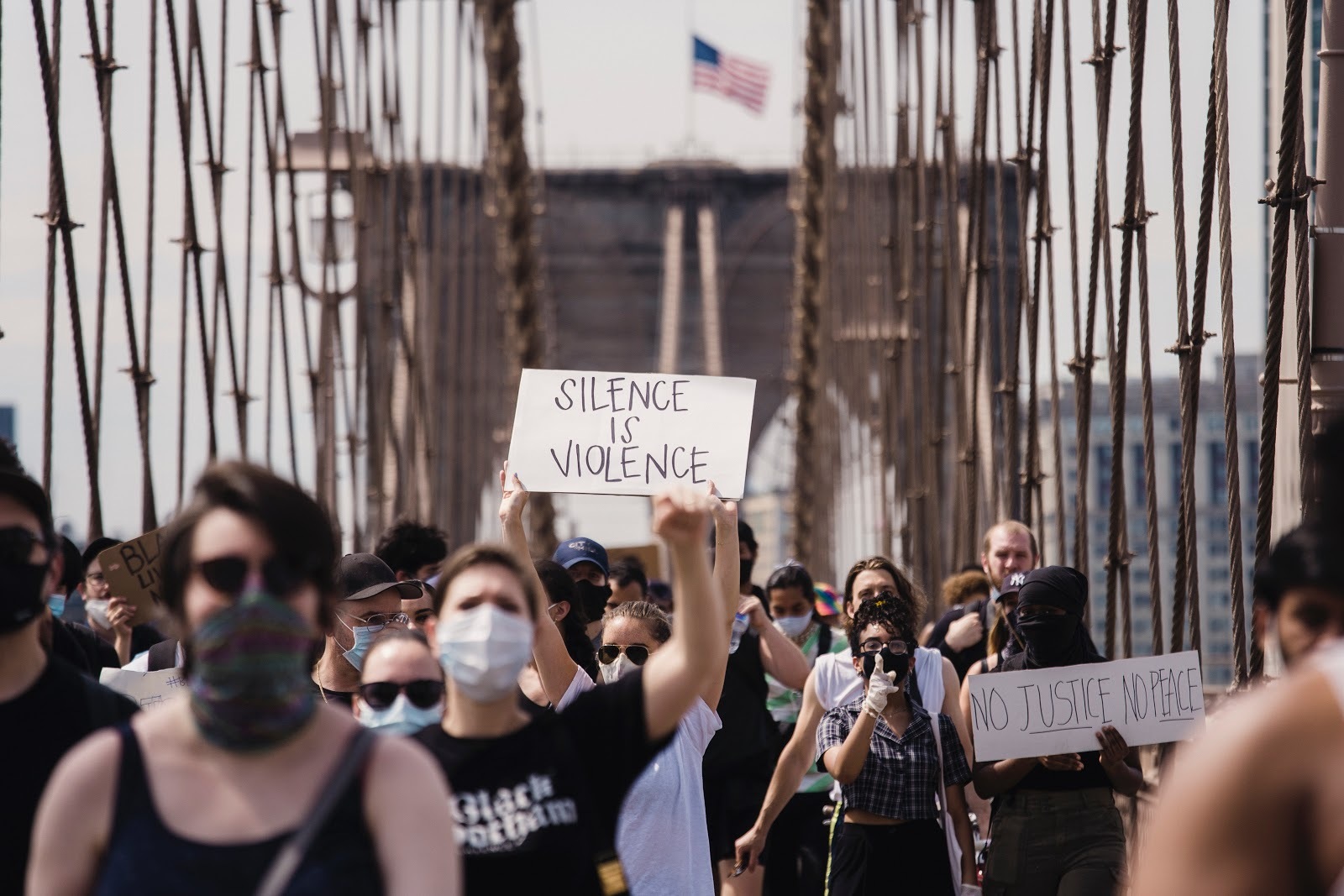 A couple of years ago, taking a firm stance against racism was considered brave. Just ask Colin Kaepernick and Nike. Sure, Nike sold more shoes than protestors burned, but Kaepernick lost his football career when he took a knee. Yet, now that the majority of Americans support the movement he was advocating for, social justice campaigns can come across as bandwagoning.

This puts brands in a tough position: They're expected to say something or, better yet, do something. But if that something doesn't come across as authentic and organic, their efforts can seem like performative activism, which reflects worse on the brand than silence. In fact, 73 percent of Americans say that Black Lives Matter-related statements from brands should be followed by measurable actions, according to a Mitto survey. Yet, more than one-third (38%) think brands are falling short in their social justice communication—including 60 percent of adults under age 34.

So, what does it take to prove your brand's commitment to social justice reform?

1. An Understanding of the Cause(s)

The better you understand the issues at hand, the more opportunities you'll find to get your brand involved—not just by saying Black Lives Matter, but by shining a light on what needs to change and partnering with organizations working to effect that change.

Ben & Jerry's has supported the movement for years. In 2016, the brand explained to customers why Black Lives Matter. Since then, the ice cream maker has released a number of limited-run flavors, including Together Pecan Resist and EmpowerMINT, that raised money to fight voter suppression. Last year, it introduced Justice ReMix'd, which benefitted a social justice organization called the Advancement Project. 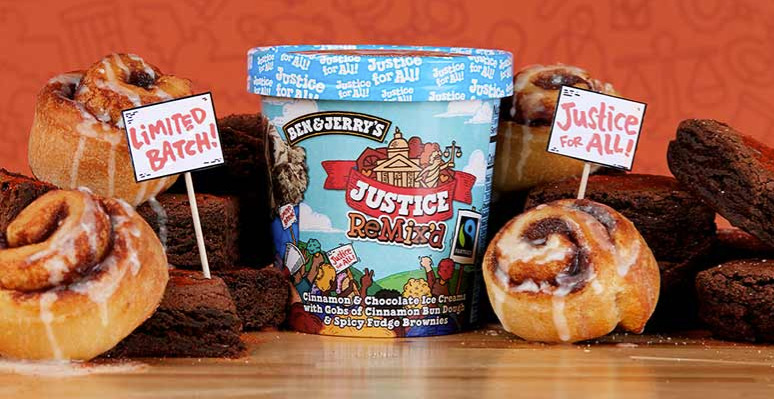 The movement has evolved from asking people and brands to say that Black Lives Matter to asking them to acknowledge (and dismantle) white privilege. Ben & Jerry's content marketing has evolved accordingly.

Instead of lending its voice and support to the cause as it did in 2016, Ben & Jerry's demonstrated its understanding of the issues following the murder of George Floyd. In a 2020 blog post, "Silence Is NOT an Option," the brand was "clear about the urgent need to take concrete steps to dismantle white supremacy in all forms." It called for four specific actions:

Ben & Jerry's also plans to help its audience better understand the Black Lives Matter movement. The brand has teamed up with Vox Media to launch a new podcast called the "Who We Are Project." The six-episode podcast, which kicked off on September 15, examines the history of legal discrimination, slavery, segregation, and state-sponsored violence against Black people in the U.S.

Not only does Ben & Jerry's understand the problem, but it has also put a lot of thought and funding into finding solutions. And that's the ideal spot for a brand to be in right now.

Ben & Jerry's, with its history of activism and diverse board of directors, has earned the right to lecture consumers about racism. If your brand can't make the same claims, then you need to clean your house before you start talking about other people's messes.

When Piplsay polled consumers about how brands should take a stand against racism, the top answer (from 31 percent of respondents) was to eliminate racial bias in their own organizations, versus 18 percent who think a brand's first step should be speaking out and 12 percent who prefer that companies donate to anti-racist causes.

Many brands have taken the hint, and as they come out in support of Black Lives Matter, they're also overhauling their diversity and inclusion efforts to create better spaces for their employees and their communities.

Starting next year, CBS has promised that it will devote at least 25 percent of its script budget to projects by people of color and staff writers' rooms with 40 percent people of color. The network has already added new diverse writers for this season and set a goal of 50 percent representation by the 2022-2023 TV season.

NBCUniversal has taken similar steps. It committed to a Fifty Percent Challenge Initiative, which aims to create a workforce that's 50 percent people of color and 50 percent female. Meanwhile, large companies that don't take this opportunity to diversify face more backlash than ever in this current climate. One Instagram account is even calling brands out and showing their "True Colors" by first whitewashing corporate logos, and then adding as much color as the company's leadership team. 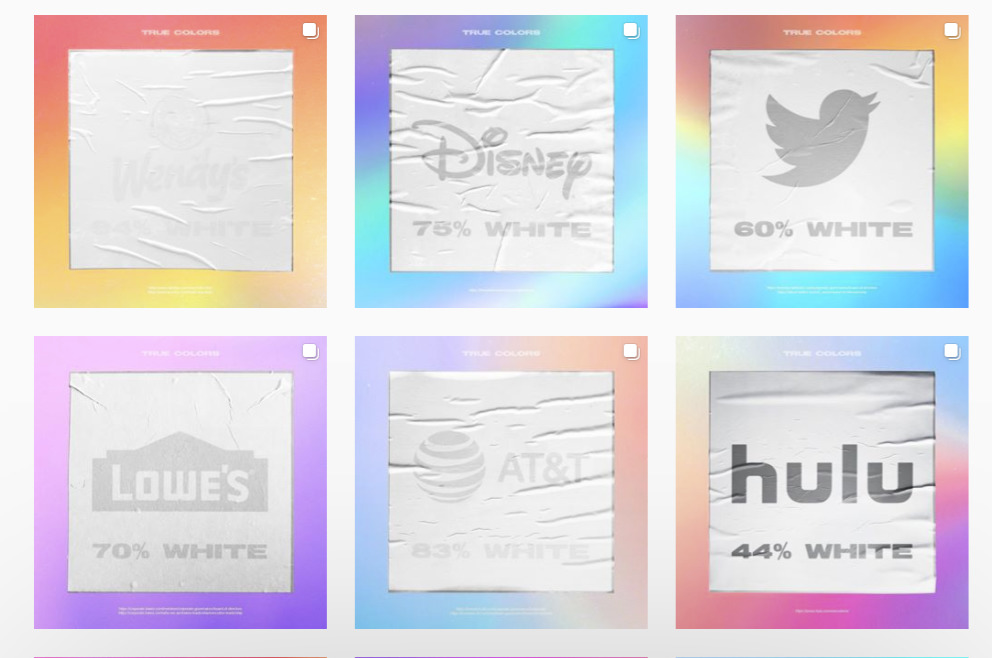 The True Colors account description asks, "What if brand logos were as white as their leadership?" The reveal: Some of them are barely visible. For these companies, just saying Black Lives Matter will ring hollow until they make strides to promote diversity within their employee pool.

3. Commitment to the Cause

If you're going to say Black Lives Matter in 2020, you've got to mean it. Half-hearted commitments to the cause will only land you in hot water and unflattering news headlines.

Few businesses have demonstrated their commitment to the cause as firmly as Uber. On August 28, the 57th anniversary of Martin Luther King Jr.'s "I Have a Dream" speech, the ride-sharing company launched a campaign that expressed its support for social justice in the plainest possible terms: "If you tolerate racism, delete Uber." 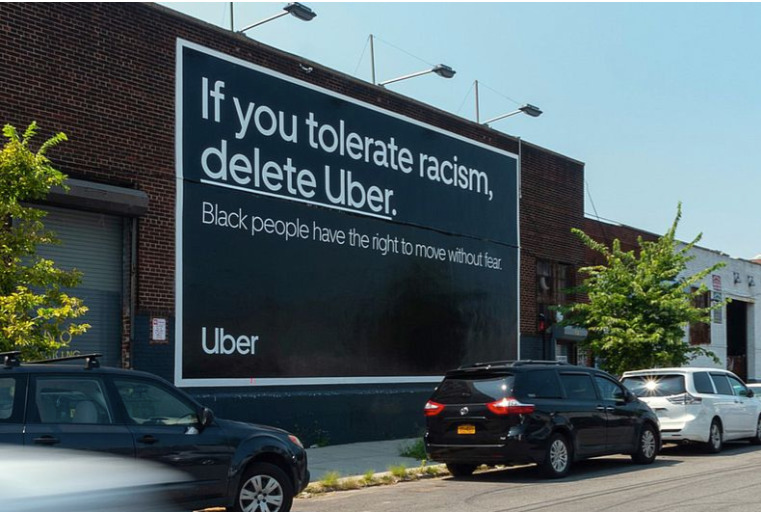 Uber's campaign includes social media posts, emails, app notifications, and billboards in 13 major cities. Uber also sponsored the "Get Your Knee Off Our Necks" march in Washington, D.C. on August 28 and emailed users the ACLU's Protesters' Rights guide, which includes tips for how to protest peacefully.

Uber might be the biggest brand to send such a strong message of solidarity, but it's not the only one. When Yorkshire Tea received a social media shoutout from a conservative vlogger thanking them for not voicing support for Black Lives Matter, the British brand told her, "Please don't buy our tea again."

When PG Tips, a competitive tea brand, caught wind of the exchange, the Unilever-owned company backed them up with a supportive tweet: "If you are boycotting teas that stand against racism, you're going to have to find two new brands now #BlackLivesMatter #Solidaritea." Now, that's a powerful way to say, "We're all in this together!"

4. Activism Efforts in Place to Support the Cause

Turning your back on racist customers is one way to put your money where your mouth is. The other way is to donate employee time, corporate funds, and brand publicity to advocacy groups and social justice nonprofits—and there are plenty of those.

Social justice content marketing campaigns face backlash if they promote the cause without donating to it, even in the cases of Black Lives Matter frontrunners such as Nike. In the wake of George Floyd's murder, Nike released a video on social media urging people not to ignore racism in America, which revised the brand's tagline to read, "For once, just don't do it."

The widely shared video garnered praise from many social media users, but others wanted to know more—specifically, what did Nike plan to do about it? As one person asked, "Where is the real action? This will only be considered a selfish marketing strategy until we see some solid action."

Nike got the message and followed up with a promise to give $40 million to Black charities and advocacy groups over the next four years. Not all companies can afford to be so generous, especially during the COVID-19 pandemic, but the lesson applies to all brands: If you're going to say Black Lives Matter, you need to back it up with your actions.

To create an effective social justice content marketing campaign requires more than creative thinking, it also requires soul-searching and, more often than not, organizational changes. Sure, you might ruffle some feathers, but good social justice content marketing campaigns aren't about winning or losing audiences, they're about showing the world what your brand stands for—and won't stand for.

What Capabilities Should Be Built into Your Voice Search Strategy?

Why Your Voice Search Strategy Needs to Think Fast, Local, and Young 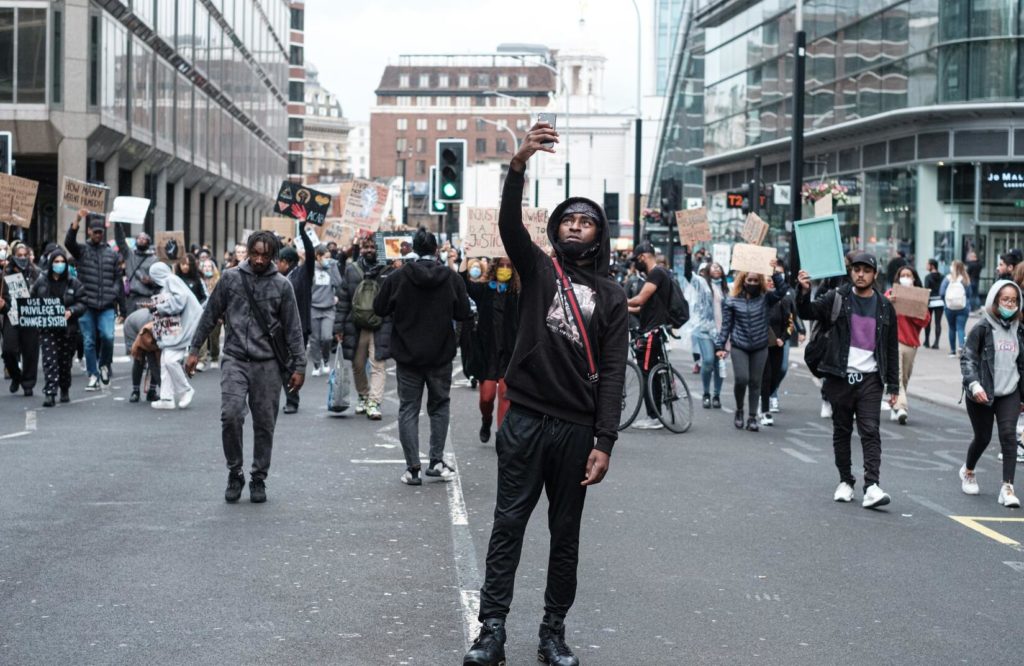