When I log in to Facebook or Instagram, there are always posts I scroll by without pause-the political rants, the posts about someone's relationship, and the ones about what you had for dinner. However, there are posts from a few publishers that I look for in my feed and stop to read all the way through. Humans of New York is one of them.

If you're one of the 17.7 million Facebook fans, or 5.4 million Instagram followers, you probably feel the same way. Humans of New York (HONY), the photo-blog started by Brandon Stanton in 2010, has exploded into a cultural phenomenon with the intention of sharing the stories of everyday people. What started out as Stanton's mission to photograph 10,000 New Yorkers has transformed into an ongoing series of interviews with strangers around the world, sharing their stories through candid portraits and accompanying mini-narratives. His work is not only limited to New Yorkers; he has traveled to Iraq, Afghanistan, and Pakistan to document the daily struggles of those living in war-stricken countries, spent time in European nations to document the refugee crisis, and most recently, went to the Pediatric Department of the Sloan Kettering Cancer Center in New York to share the stories of patients and their families as they navigate through the cruel, and unpredictable disease that is childhood cancer. 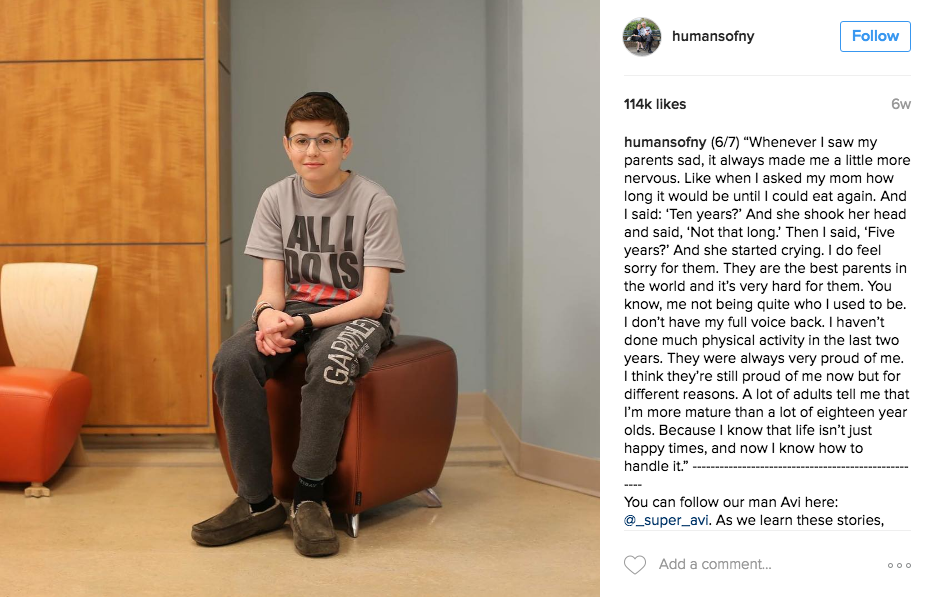 It is the most recent series of posts that really got me-this series on fighting pediatric cancer. I personally don't know anyone who had cancer as a child or know of any parents who had to go through the agony of seeing their child in so much pain. While reading these posts-from both the patient and parent's perspective (and shedding a few tears)-something stuck with me. I felt like I knew these people; I felt involved in their story; yet, they were complete strangers.

How is it that at the same time as marketers are looking for the next big thing to incorporate into their content strategies-virtual reality, 360-video, haptic technology-a simple image with a caption can be the most compelling story?

Why HONY Works-and What Marketers Can Learn

What has proven to be the key ingredient to Brandon Stanton and HONY's success is its relatability. Although each story differs from the ones before and after it, someone, somewhere in the world, finds a comfort knowing a similar situation happened to them. Every one of thousands of images he has captured over the years creates its own story, unique to that individual. I don't relate with every picture posted, and neither can thousands of others, but we do feel for them. And the people who do empathize with Stanton's subjects are that much more inclined to share and engage with the stories.

Separately, these stories tell individual experiences, but together, they form a broader narrative of the human experience.

Brandon Stanton has created Humans of New York with the perfect recipe for digital storytelling. He's approachable, asks the right questions, and gets genuine answers in a first-person point of view. He's not a recognizable celebrity, and he's not pushing product. He's letting his subjects take the full spotlight. People are willing to open up to a stranger and share their secrets, their struggles, and their moments of joy. Everyone has a story to tell, and Stanton captures them beautifully.

His success has landed him interviews with Katie Couric and Ellen DeGeneres and led to dozens of featured articles in publications such as the Huffington Post, NPR, and CNN. Even President Obama has commented on HONY's Facebook posts, offering words of wisdom and encouragement, and has invited a few subjects who have particularly captured his attention to the White House.

But this was not Stanton's mission. His goal of photographing 10,000 New Yorkers and sharing their stories has turned into a cultural sensation, has transformed the lives of thousands, and inspired millions. HONY has truly taken digital storytelling to a level all marketers should strive to achieve.

A Simple Concept for a Simple Purpose

HONY's success is due in large part to its commitment to simplicity. As brands try to come up with complicated campaigns to build an audience, HONY finds more success than most brands ever will by posting an original portrait and a few hundred words. No complicated animations or special effects.

Even the way HONY shares content is simple. HONY thrives on social media-Facebook Likes, comments and shares, and the same with Instagram and Twitter. There are no email newsletters, no Facebook ads, and no sponsored Tweets or Instagram posts. As a storytelling platform that thrives solely on organic social media shares and Likes, it's impressive how much engagement each photo receives. Stanton said that he tried to start his project on a separate website, but found most of his engagement and growth came from social media platforms. Once he found the place to share stories, his work took off. He found his audience, gave them what they wanted, and they continue to come back.

Lesson for brands: Know your audience, and where they are. Simplicity gains (and keeps) attention.

HONY Is What Every Marketer Should Strive to Be-Authentic

HONY is one of the most genuine accounts on any social media platform. While scrolling through the posts of these strangers, young and old, like me, not like me, I find myself sympathizing, empathizing, and relating to strangers. I feel their pain, their joy, their sorrow, their moments of bliss. While each story is unique and comes from one person's experience, it is somehow relatable to thousands of people. The authenticity comes through in every picture, and no one questions the validity of the story. This is what creates the most engagement.

Many brands hire celebrities to promote products. Others try to use "regular people" to give testimonials, but oftentimes they're actors. HONY stays away from promotional posts, product placements, and celebrity interviews. "No-name people" are the most powerful and garner the most attention, bringing the realness of New York and the world to the public view instead of the lives of the rich and famous we see on TV shows and movies. Its realness is refreshing-and never positioned as an advertisement.

Each Story Acts as a Call to Action

Great stories inspire action. As a content marketer, you want to create something so inspiring and motivating that will make people do something. A few HONY posts have accomplished this particularly well, including Vidal Chastanet, a 13-year-old whom Stanton interviewed in Brooklyn. Stanton asked Chastanet who has influenced him the most in his life-one of Stanton's most popular questions to ask. While many might say a family member, Vidal gave a different answer: 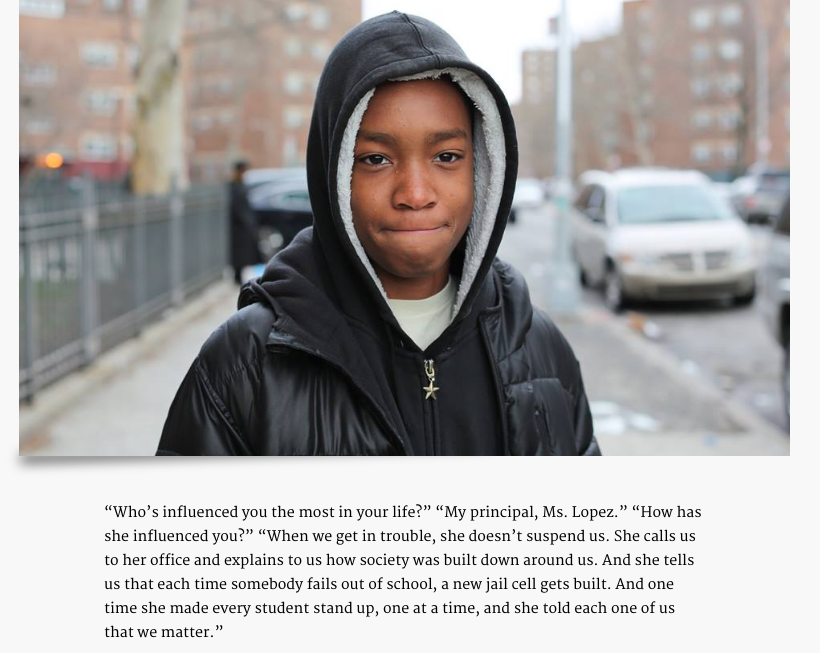 What you can't see in this photo is the struggle. Chastenet lives in a neighborhood where 85 percent of the population are African-Americans who qualify as low-socioeconomic status. Fewer than a third have graduated high school, and the highest income is $28,000 a year. As a 13-year-old boy growing up in an impoverished area, his response is inspiring.

What you also don't see is the struggle that the principal, Nadia Lopez, is going through. Lopez was interviewed on PBS following the viral post:

"I was ready to quit, I was ready to resign, I was done, and my mother told me to pray on it, and I just felt like I didn't want to pray on it, I wasn't ready to pray. I was angry. I'm a faithful person, but I was angry at that time. I did pray about it Monday, and God showed me how much of a significance I was, not only to Vidal but to people around the world who could identify what it was like to know someone who was their champion and pushed them through."

The impact of this post inspired an Indiegogo campaign that raised over $1.4 million dollars for the school from 50,000+ donations. They used that money to fund a trip for sixth graders on a summer trip to Harvard to "expand their idea of their potential."

Did most of the people who donated to the campaign know the students or the teachers? No, but it didn't stop them from wanting to help change the lives of students whose futures were just beginning to mold. At no point in the story did the person ask for money or want people to feel bad for him. People helped out on their own. This true story started from an image and motivated people to go out of their way and make a difference.

Lesson for brands: Tell a good story first, and make it easy for your audience to take the next step.

For Stanton, episodic content is a rarity, and when paired with the right story, is able to create the most engaging content. The pediatric cancer series used episodic content in the way all marketers should strive for. In this series of interviews with patients, parents, doctor, nurses, and researchers, Stanton photographed each subject in a way that truly captivated the story they were sharing. The harsh reality of childhood cancer cannot be told in one image-their stories are filled with twists and turns, ups and downs. Their stories are never over. 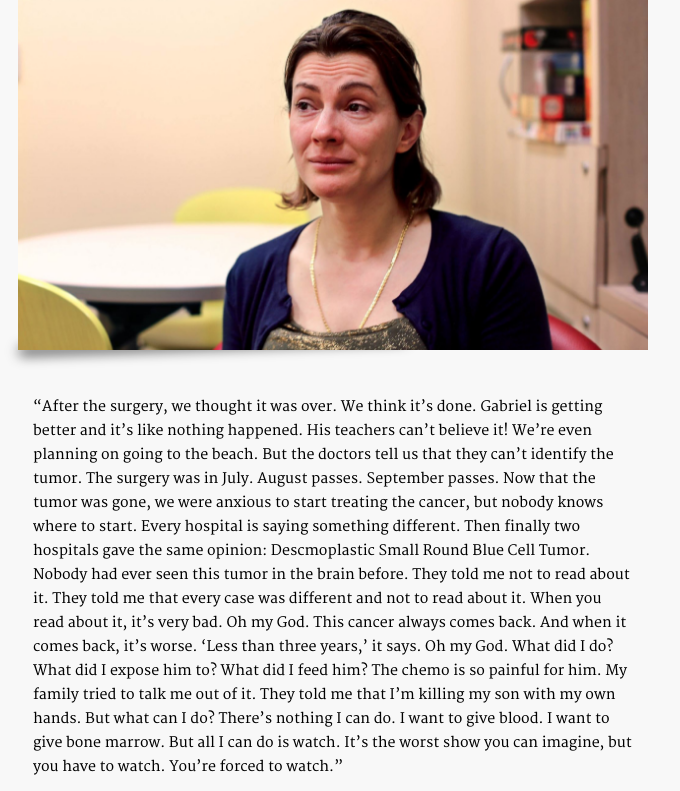 In episodic content, there are usually a few chapters: a beginning, middle, and end. For these people, there is no end to the story, leaving the audience captivated. The way Stanton ends each caption draws the reader back, refreshing the page to find out the outcome. He leaves us on the edge of our seats, wondering what will happen next.

Lesson for brands: Leave your audience wanting more. Make it your goal to have them refreshing the page until new content is available. Do this through thoughtful captions, engaging topics, and inspiring stories.

HONY's purpose is to share people's stories with the world. Its simplicity, consistency, and authenticity make HONY a leader in the digital storytelling space. If marketers knew just how impactful these qualities were in connecting, engaging, and keeping audiences' attention, wouldn't they want to tell more of these stories?

Dara Cohen is a Demand Generation Specialist at Skyword. She graduated from UMass Amherst in 2015 where she studied Sociology and English. Dara enjoys exploring the streets (and eats) of Boston, spending time with family and friends, and is looking forward to the day when she can go back to Barcelona, her favorite city. 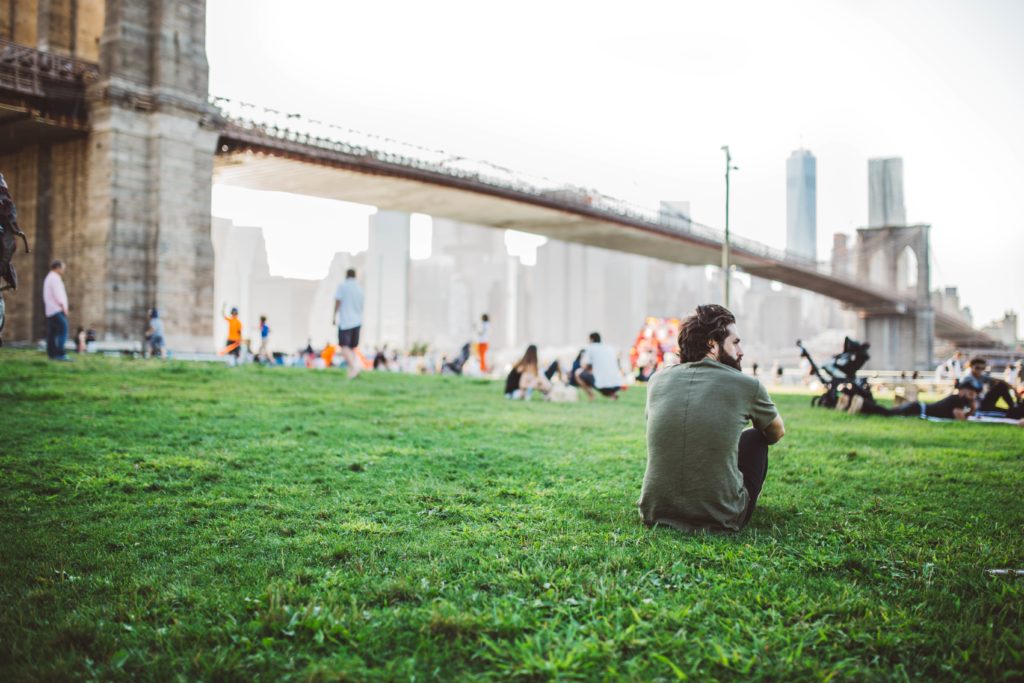